American Gangsters: The Life and Legacy of Lucky Luciano (Paperback) 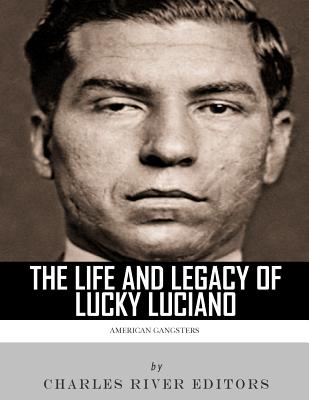 American Gangsters: The Life and Legacy of Lucky Luciano (Paperback)


Available in Warehouse. Wait for Email Confirmation for ETA
This book cannot be returned, cancelled, or exchanged. Please call for availability and pricing
*Includes pictures of Lucky and other important people in his life.
*Explains Lucky's relationships with other notorious gangsters of his era, including Gambino, Genovese, and Bugsy Siegel.
*Includes some of Lucky's most colorful quotes and newspaper articles reporting his most famous hits.
*Explains the connection between Lucky Luciano and Mario Puzo's The Godfather.
*Includes a Bibliography for further reading.
"He was born and died in Italy, yet the influence on America of a grubby street urchin named Salvatore Lucania ranged from the lights of Broadway to every level of law enforcement, from national politics to the world economy. First, he reinvented himself as Charles ("Lucky") Luciano. Then he reinvented the Mafia. His story was Horatio Alger with a gun, an ice pick and a dark vision of Big Business." - Edna Buchanan, Time Magazine
The Mafia has long fascinated Americans, who have made celebrated pop culture fixtures out of men like Al Capone and turned movies and television series like The Godfather and The Sopranos into American institutions despite the violence associated with organized crime. Of all the notorious mobsters of the 20th century, the one most instrumental in putting the organization into organized crime and thus establishing the Mafia as it's recognized today was Lucky Luciano.
The man who would become the Father of Organized Crime in the United States was born Salvatore Lucania in Sicily, but he would quickly make a name for himself after his family moved to New York City when he was still a child. By his teenage years, he was running the streets, organizing his own teenage gang, and moving in circles with the likes of Meyer Lansky, who would become key figures in Lucky's rise to power.
Like so many young adults of his time, Lucky's participation in the criminal underworld began in earnest during Prohibition, and he was ambitious from the beginning. Lucky networked with other young mobsters, all of whom became known as the Young Turks, and when Lucky eliminated bosses Giuseppe Masseria and Salvatore Maranzano in 1931, he had reached the top of organized crime in New York.
From the top, Luciano would implement the organizations and mob rackets that are so familiar to Americans today. In addition to having the New York scene divided into the Five Families, Luciano established The Commission to discuss and govern organized crime across the country, and dipped his toes into every conceivable racket, including gambling, bookmaking, loan-sharking, drug trafficking, unions, labor, construction and extortion.
Eventually Lucky would run out of luck. After being arrested dozens of times over a 20 year period, Luciano was imprisoned in the mid-'30s, and a decade later he would be deported back to Italy. Nevertheless, Lucky continued to try to fight for control of organized crime in New York from his jail cell, Italy, and Cuba, staying in the game until the very end.
American Gangsters: The Life and Legacy of Lucky Luciano looks at the life and crime of the mob boss, his influence on organized crime, and his legacy. Along with pictures of Luciano and important people, places, and events in his life, you will learn about the father of organized crime like you never have before, in no time at all.