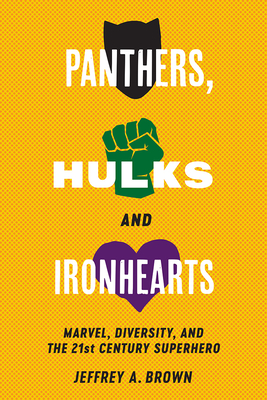 By Jeffrey A. Brown


This title is likely unavailable. Email or call for price and availability.
Marvel is one of the hottest media companies in the world right now, and its beloved superheroes are all over film, television and comic books. Yet rather than simply cashing in on the popularity of iconic white male characters like Peter Parker, Tony Stark and Steve Rogers, Marvel has consciously diversified its lineup of superheroes, courting controversy in the process.

Panthers, Hulks, and Ironhearts offers the first comprehensive study of how Marvel has reimagined what a superhero might look like in the twenty-first century. It examines how they have revitalized older characters like Black Panther and Luke Cage, while creating new ones like Latina superhero Miss America. Furthermore, it considers the mixed fan responses to Marvel’s recasting of certain “legacy heroes,” including a Pakistani-American Ms. Marvel, a Korean-American Hulk, and a whole rainbow of multiverse Spidermen.

If the superhero comic is a quintessentially American creation, then how might the increasing diversification of Marvel’s superhero lineup reveal a fundamental shift in our understanding of American identity? This timely study answers those questions and considers what Marvel’s comics, TV series, and films might teach us about stereotyping, Orientalism, repatriation, whitewashing, and identification.

JEFFREY A. BROWN is a professor in the Department of Popular Culture and the School of Critical and Cultural Studies at Bowling Green State University in Ohio. His many books include Black Superheroes: Milestone Comics and Their Fans and Batman and the Multiplicity of Identity: The Contemporary Comic Book Superhero as Cultural Nexus.
"Jeffrey Brown does it again! With his usual compelling style of writing, this time we are treated to a very timely analysis of Marvel’s contemporary multicultural superheroes and their complex entanglements. The significance of this text is its sophisticated way of unpacking the pop cultural panoply of ideology, history, and identity in which the superhero aesthetic is inextricably confined."
— Ronald L. Jackson II

"[Brown] has written a wonderfully readable book whose academic posture does not make it any less appealing to the layperson or the aficionado."
— South China Morning Post