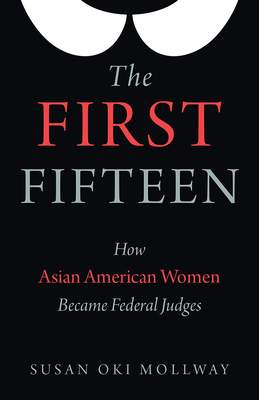 
Available in Warehouse. Wait for Email Confirmation for ETA
In 1998, an Asian woman first joined the ranks of federal judges with lifetime appointments. It took ten years for the second Asian woman to be appointed. Since then, however, over a dozen more Asian women have received lifetime federal judicial appointments.

This book tells the stories of the first fifteen. In the process, it recounts remarkable tales of Asian women overcoming adversity and achieving the American dream, despite being the daughters of a Chinese garment worker, Japanese Americans held in internment camps during World War II, Vietnamese refugees, and penniless Indian immigrants. Yet The First Fifteen also explores how far Asian Americans and women still have to go before the federal judiciary reflects America as a whole.

In a candid series of interviews, these judges reflect upon the personal and professional experiences that led them to this distinguished position, as well as the nerve-wracking political process of being nominated and confirmed for an Article III judgeship. By sharing their diverse stories, The First Fifteen paints a nuanced portrait of how Asian American women are beginning to have a voice in determining American justice.
SUSAN OKI MOLLWAY has been a federal judge in the District of Hawaii for over twenty years, serving as the chief judge of the district from 2009 to 2015. Before entering the judiciary, she graduated cum laude from Harvard Law School in Cambridge, Massachusetts, then worked as a civil litigator and later earned an LL.M. from Duke University in Durham, North Carolina.
"The history and stories captured by Susan Oki Mollway not only preserve an important history of Asian American women in the federal judiciary, but also hopefully encourage more Asian American and other women to put themselves forward for nomination by demystifying the process. The book explores the fascinating back stories of these amazing women beyond their official bios."
— Karen K. Narasaki

“At a time when the importance of having federal judges with diverse life experiences and perspectives never has been more apparent, Susan Oki Mollway’s accounting of the paths followed by our nation’s first fifteen Asian American and Pacific Islander women judges is especially illuminating. In granular detail, it describes the attributes, talents and circumstances that enabled each of its subjects to overcome barriers and become a leader in the federal judiciary.”
— Hon. Jeremy Fogel (ret)

“The First Fifteen shares the powerful narratives of the first Asian American women to become Article III judges, with a focus on their pathways to the federal bench. Through meticulous and thoughtful analysis, Susan Oki Mollway goes far beyond biography to also suggest common background and character traits, reflect on diversity in the judiciary, and recognize the external forces that contributed to their success. The First Fifteen should be required reading for everyone interested in federal courts, issues of diversity, gender studies, and Asian Americans.”
— Meera Deo