Act of War: A Thriller (The Scot Harvath Series #13) (Paperback) 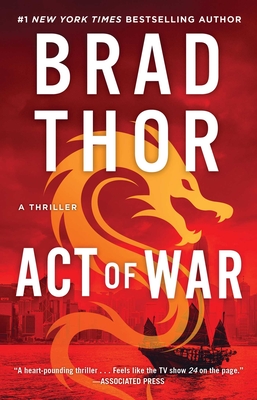 Act of War: A Thriller (The Scot Harvath Series #13) (Paperback)

This is book number 13 in the The Scot Harvath Series series.

The #1 New York Times and #1 Wall Street Journal bestselling author Brad Thor delivers his most frightening and pulse-pounding thriller ever!

After a CIA agent mysteriously dies overseas, his top asset surfaces with a startling and terrifying claim. There’s just one problem—no one knows if she can be trusted.

But when six exchange students go missing, two airplane passengers trade places, and one political-asylum seeker is arrested, a deadly chain of events is set in motion.

With the United States facing an imminent and devastating attack, America’s new president must turn to covert counterterrorism operative Scot Harvath to help carry out two of the most dangerous operations in the country’s history.

Code-named “Gold Dust” and “Blackbird,” they are shrouded in absolute secrecy as either of them, if discovered, will constitute an act of war.
Brad Thor is the #1 New York Times bestselling author of twenty-two thrillers, including Black Ice, Near Dark (one of Suspense Magazine’s Best Books of the Year), Backlash (nominated for the Barry Award for Best Thriller of the Year), Spymaster (“One of the all-time best thriller novels” —The Washington Times), The Last Patriot (nominated Best Thriller of the Year by the International Thriller Writers association), and Blowback (one of the “Top 100 Killer Thrillers of All Time” —NPR). Visit his website at BradThor.com and follow him on Facebook at Facebook.com/BradThorOfficial and on Twitter @BradThor.