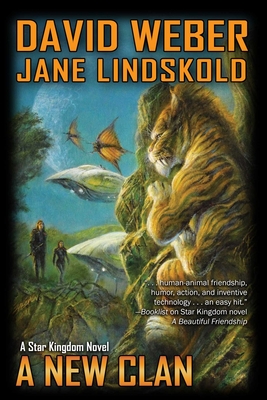 This is book number 4 in the Star Kingdom (Weber) series.

Freshly home from an internship on Manticore, teenaged Stephanie Harrington is up to her eyebrows in trouble.

There’s the new treecat adoptee who needs to be kept from becoming a risk to the carefully guarded secret of just how smart the arboreal inhabitants of Sphinx really are.

There’s the overeager journalist whose campaign to protect the treecats from exploitation as the newest, coolest pet on any planet could threaten the very creatures he seeks to defend.

And there’s the mysterious rash of weird accidents that are plaguing Sphinx’s younger inhabitants—including some of those nearest and dearest to Stephanie.

In trying to get enough proof to get the understaffed authorities of her pioneer planet to act, Stephanie will be called upon to attempt things she never imaged doing—including going undercover into the wilds of the late-night club scene, a realm where her faithful treecat guardian, Lionheart, cannot follow….

About A New Clan:

“...the story flows smoothly, the already remarkably established world holds wide appeal...plenty of fast-paced drama and trauma.  All fans of this crossover YA series will appreciate the ongoing bonds between the humans and treecats.”—Library Journal

About David Weber and the Honor Harrington series:
“. . . Everything you could want in a heroine . . . plenty of action.”—Science Fiction Age

Comprehensive Teacher's Guide available.
With more than eight million copies of his books in print and 33 titles on the New York Times bestseller list, David Weber is a science fiction powerhouse. In the vastly popular Honor Harrington series, the spirit of C.S. Forester’s Horatio Hornblower and Patrick O’Brian’s Master and Commander live on—into the galactic future. Books in the Honor Harrington and Honorverse series have appeared on 21 bestseller lists, including The Wall Street Journal, The New York Times, and USA Today. Additional Honorverse collaborations include the spin-off miniseries Manticore Ascendant with New York Time best-selling author Timothy Zahn; and with Eric Flint, Crown of Slaves, Cauldron of Ghosts, and To End in Fire contribute to Weber’s illustrious list of New York Times and international bestsellers.

Best known for his spirited, modern-minded space operas, Weber is also the creator of the Oath of Swords fantasy series and the Dahak Saga, a science fiction and fantasy hybrid. Weber has also engaged in a steady stream of best-selling collaborations: the Starfire series with Steve White; the Empire of Man series with John Ringo; the Multiverse series with Linda Evans and Joelle Presby; and the Ring of Fire series with Eric Flint.

Jane Lindskold is the award-winning, New York Times best-selling author of more than twenty-five novels. Lindskold has also written in collaboration with David Weber and Roger Zelazny. When she’s not writing or reading, she’s likely being ordered around by a variety of small animals. Lindskold lives in New Mexico.