Primitive Technology: A Survivalist's Guide to Building Tools, Shelters, and More in the Wild (Hardcover) 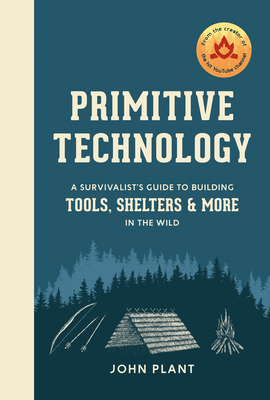 Primitive Technology: A Survivalist's Guide to Building Tools, Shelters, and More in the Wild (Hardcover)


Available in Warehouse. Wait for Email Confirmation for ETA
From the craftsman behind the popular YouTube channel Primitive Technology comes a practical guide to building huts and tools using only natural materials from the wild.

John Plant, the man behind the channel, Primitive Technology, is a bonafide YouTube star. With almost 10 million subscribers and an average of 5 million views per video, John's channel is beloved by a wide-ranging fan base, from campers and preppers to hipster woodworkers and craftsmen. Now for the first time, fans will get a detailed, behind-the-scenes look into John's process. Featuring 50 projects with step-by-step instructions on how to make tools, weapons, shelters, pottery, clothing, and more, Primitive Technology is the ultimate guide to the craft. Each project is accompanied by illustrations as well as mini-sidebars with the history behind each item, plus helpful tips for building, material sourcing, and so forth. Whether you're a wilderness aficionado or just eager to spend more time outdoors, Primitive Technology has something for everyone's inner nature lover.
JOHN PLANT is the creator of Primitive Technology, the viral YouTube channel with more than 9 million subscribers around the globe. A self-taught primitive technician, John has apprenticed as a soil tester, in a pottery shop, and at a powder coating factory. Since 2015, he has been running his YouTube channel from Far North Queensland, Australia, where he was born and raised.
“A wilderness resource for experienced craftsmen and newcomers alike.”—Outside Magazine