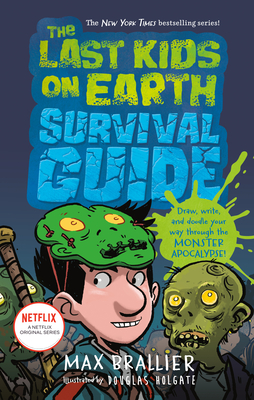 See if you have what it takes to survive the monster-zombie apocalypse in this interactive guided journal from the New York Times, USA Today, and Wall Street Journal bestselling Last Kids on Earth series, now with over 7 million copies in print.

You've read all about the Last Kids on Earth's adventures in the post-zombie-monster-apocalypse, and now it's time to get in on the action! In this interactive journal, readers will feel like they're part of the Last Kids world by taking part in creative exercises that are based on the characters and settings that they've come to know so well. They'll draw their own inventions in Quint's workshop, design their perfect kids-only hangout that will rival Jack's treehouse, put together their dream post-apocalyptic warrior outfits and weapons that will give the Louisville Slicer a run for its money, imagine themselves and their friends as zombies, and so much more. The perfect creative outlet for every Last Kids fan.

Max Brallier (maxbrallier.com) is the New York Times bestselling author of more than thirty books and games, including the previous books in the Last Kids on Earth series. He is the creator and writer of Galactic Hot Dogs, an ongoing middle-grade web serial and book series with Aladdin. He writes for licensed properties including Adventure Time, Regular Show, and Uncle Grandpa. Under the pen name Jack Chabert, he is the creator and author of the Eerie Elementary series for Scholastic Books. In the olden days, he worked in the marketing department at St. Martin's Press. Max lives just outside of New York City with his wife and daughter.

Douglas Holgate has been a freelance comic book artist and illustrator based in Melbourne, Australia, for more than ten years. He's illustrated books for publishers including HarperCollins, Penguin Random House, Hachette, and Simon & Schuster, and comics for Image, Dynamite, Abrams, and Penguin Random House.