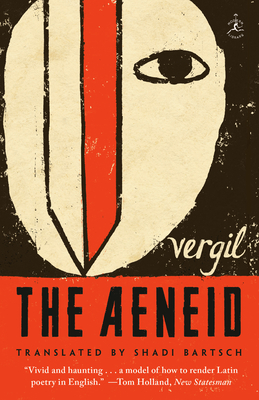 
On Our Shelves as of 9am Today
A fresh and faithful translation of Vergil’s Aeneid restores the epic’s spare language and fast pace and sheds new light on one of the cornerstone narratives of Western culture.

“Vivid and haunting . . . a model of how to render Latin poetry in English.”—Tom Holland, New Statesman

For two thousand years, the epic tale of Aeneas’s dramatic flight from Troy, his doomed love affair with Dido, his descent into the underworld, and the bloody story behind the establishment of Rome has electrified audiences around the world. In Vergil’s telling, Aeneas’s heroic journey not only gave Romans and Italians a thrilling origin story, it established many of the fundamental themes of Western life and literature—the role of duty and self-sacrifice, the place of love and passion in human life, the relationship between art and violence, the tension between immigrant and indigenous people, and the way new foundations are so often built upon the wreckage of those who came before. Throughout the course of Western history, the Aeneid has affirmed our best and worst intentions and forced us to confront our deepest contradictions.

Shadi Bartsch, Guggenheim Laureate, award-winning translator, and chaired professor at the University of Chicago, confronts the contradictions inherent in the text itself, illuminating the epic’s subversive approach to storytelling. Even as Vergil writes the foundation myth for Rome, he seems to comment on this tendency to mythologize our heroes and societies, and to gesture to the stories that get lost in the mythmaking.

Bartsch’s groundbreaking translation, brilliantly maintaining the brisk pace of Vergil’s Latin even as it offers readers a metrical line-by-line translation, provides a literary and historical context to make the Aeneid resonant for a new generation of readers.
Shadi Bartsch is a Guggenheim Laureate, the Helen A. Regenstein Distinguished Service Professor in Classics at the University of Chicago, winner of a Charles J. Goodwin Award, and the inaugural director of The Stevanovich Institute on the Formation of Knowledge. She has been a professor of classics for nearly three decades, has published twelve books (monographs and edited volumes), and translated three of Seneca’s tragedies: Thyestes, Medea, and Phaedra.

Publius Vergilius Maro (70–19 b.c.), known as Vergil, was born near Mantua at the end of the Roman Republic. He was the most famous poet of his age and his Aeneid gave the Romans a great national epic equal to the Greeks’, celebrating their city’s origins and the creation of their empire. Vergil is also credited with The Eclogues and The Georgics.
“A remarkable achievement . . . Bartsch manages to keep pace with Virgil’s verse, capturing the ‘dense, lapidate language’ of the Latin, and the energy of the narrative, without unduly flattening its meaning. . . . This translation reads like Virgil.”—The Times Literary Supplement

“Blending solid scholarship with poetic sensibility, classicist [Shadi] Bartsch delivers a new version of the foundational poem of Imperial Rome. . . . [This translation] gives some sense of the Latin and the tautness of its lines; most other English versions are fully 30 percent or more longer than the original, but not hers. . . . Through seductions, treacheries, murders, deicides, and other episodes, Bartsch—her scholarly notes as vigorous as her verse—produces an excellent companion for students of the poem and of Roman history. A robust, readable, reliable translation of a hallmark of world literature.”—Kirkus Reviews (starred review)

“A tight, readable translation with a welcome feminist outlook and savvy engagement with the poem’s political and imperial themes and imperialist legacy. Its natural iambic voice, clear language, and faithfulness to the tight, fast-moving pace of Vergil’s original make it a refreshing way for modern audiences to access the Aeneid’s power.”—Ada Palmer, award-winning author of Reading Lucretius in the Renaissance and the Terra Ignota series

“The best version of the Aeneid in modern English: concise, readable, and beautiful, but also as accurate and faithful to Vergil’s Latin as possible. And the ‘Vergil’s Latin’ that she aims to stick close to reflects modern scholars’ realization that Vergil’s Latin is often difficult and strange; here it helps that she is one of the most accomplished Latinists to translate the poem, knows all the latest research, and is willing to wrestle with the most difficult passages. But this is not a translation just for scholars: Bartsch writes clear, vivid, concise lines that read well and read rapidly as she aims for ‘a kind of parallel to the experience of reading Vergil in Latin.’ The introduction and notes are concise, helpful, informative, provocative, and interesting. Readers, teachers, and students will find the kind of translation they need for private reading or a classroom encounter with the poem, and scholars may find that Bartsch has noticed new things in the Latin.”—James J. O’Hara, George L. Paddison Professor of Latin, University of North Carolina at Chapel Hill