Ninja: The Most Dangerous Game: [A Graphic Novel] (Paperback) 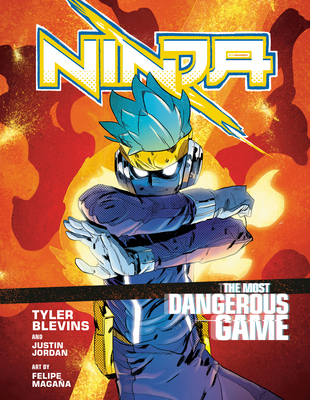 Ninja: The Most Dangerous Game: [A Graphic Novel] (Paperback)


This title is likely unavailable. Email or call for price and availability.
The game is real. The stakes are life and death. It’s on gaming superstar Ninja to save the world in this original graphic novel series!

A mysterious video game controller teleports Tyler “Ninja” Blevins and other players into a real battle-royale game world. Ninja quickly learns that a power-hungry villain plans to add Earth to his collection of conquered realms. Before doing so, he will force Ninja and the other gamers to fight until only one remains.

But he didn’t count on Ninja fighting back and inspiring others to do the same. Ninja, his trusty sentient headband “HB,” and a ragtag team of rebels rise up and take a stand. They’re not just trying to win a game anymore, they’re ready to start a revolution.
Tyler “Ninja” Blevins is a professional gamer, streamer, and content creator. He is massively popular for playing Fortnite (which boasts forty million players per month), though he initially gained his fanbase by competing in professional Halo tournaments. After quitting esports to become a streamer, he played various First-Person Shooter Battle Royale games (such as H1Z1 and PUBG), but found his big break with Fortnite. His energetic, entertaining persona and unmatched gaming prestige have garnered him tens of millions of followers worldwide.

Justin Jordan has penned comics for Image, DC, and Marvel Comics, as well as the Call of Duty: Zombies graphic novels for Dark Horse Books and Urban Animal on Webtoon. In 2012, he was nominated for the Harvey Award for Most Promising New Talent and is one of the writers of the Eisner-nominated In the Dark: A Horror Anthology and Where We Live: A Benefit for the Survivors in Las Vegas.

Felipe Magaña is a character designer and concept artist for comics and video games.