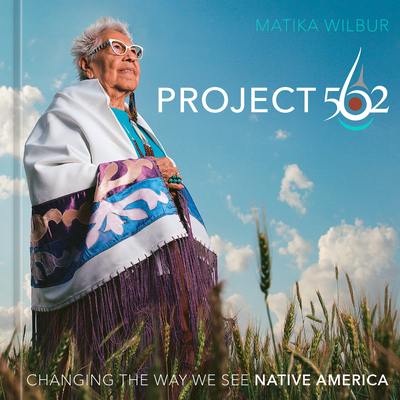 
Available for Pre-Order Now
A photographic and narrative celebration of contemporary Native American life and cultures, alongside an in-depth examination of issues that Native people face, by celebrated photographer and storyteller Matika Wilbur of the Swinomish and Tulalip Tribes.

“This book is too important to miss. It is a vast, sprawling look at who we are as Indigenous people in these United States.”—Tommy Orange (Cheyenne and Arapaho), author of There There

In 2012, Matika Wilbur sold everything in her Seattle apartment and set out on a Kickstarter-funded pursuit to visit, engage, and photograph people from what were then the 562 federally recognized Native American Tribal Nations. Over the next decade, she traveled six hundred thousand miles across fifty states—from Seminole country (now known as the Everglades) to Inuit territory (now known as the Bering Sea)—to meet, interview, and photograph hundreds of Indigenous people. The body of work Wilbur created serves to counteract the one-dimensional and archaic stereotypes of Native people in mainstream media and offers justice to the richness, diversity, and lived experiences of Indian Country.

The culmination of this decade-long art and storytelling endeavor, Project 562 is a peerless, sweeping, and moving love letter to Indigenous Americans, containing hundreds of stunning portraits and compelling personal narratives of contemporary Native people—all photographed in clothing, poses, and locations of their choosing. Their narratives touch on personal and cultural identity as well as issues of media representation, sovereignty, faith, family, the protection of sacred sites, subsistence living, traditional knowledge-keeping, land stewardship, language preservation, advocacy, education, the arts, and more.

A vital contribution from an incomparable artist, Project 562 inspires, educates, and truly changes the way we see Native America.
Matika Wilbur is a critically acclaimed social documentarian and photographer from the Swinomish and Tulalip peoples of coastal Washington. Project 562, a crowd-funded initiative to visit, engage, and photograph people from over 562 sovereign Tribal Nations in North America, is her fourth major creative venture elevating Native American identity and culture. She co-hosts the All My Relations podcast with Dr. Adrienne Keene as a platform that invites guests to delve into subjects facing Native peoples today and explore the connections between land, non-human relatives, and one another. She has offered over 300 keynotes at such places as Harvard, Yale, Berkeley, Google, TED Talks, the National Education Association, and National Geographic Explorer, and is a regular contributor to the New York Times.
“This book is too important to miss. It is a vast, sprawling look at who we are as Indigenous people in these United States. Here is how we talk, what we talk about, and what stories people need to hear from us. It spans a land and its people unfathomably older than the country it finds itself a part of. This book is straight from the mouths of this land’s original people, through the lens and artistry of a vital photographer and storyteller. Open this book to any page and you will find life, a story, and the brilliance and beauty of our people alongside our pain and humor. Our diversity is on full display in these pages. Matika Wilbur has gifted us this vision, this project, this jewel of a book.”—Tommy Orange, author of There There