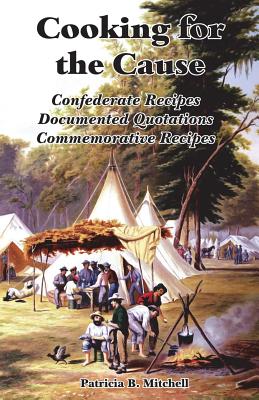 By Patricia B. Mitchell


Available in Warehouse. Wait for Email Confirmation for ETA
This book cannot be returned, cancelled, or exchanged. Please call for availability and pricing
An overview of the food situation in the South during the American Civil War. Cooking for the Cause, by Patricia B. Mitchell, brims with quotations, recipes (both old and updated), and illuminating narrative about the "coping" of the South during the Civil War. Because of war-time shortages (brought on by the fact that most manufacturing was done in the North, and by the coastal blockade), Southerners became experts at finding substitutes for necessary items. Coffee made from acorns or tea brewed from holly leaves were drunk, but not with delight. "Apple Pie Without Apples" and unleavened biscuits were baked. (Indigestion trumps starvation.) Read much more about Southern ingenuity in Cooking for the Cause. 139 numbered pages including index. 87 research notes. 55 recipes, including both historical receipts and commemorative dishes. First published as a Compact Edition in 1988; this Bookshelf Edition published in 2018.
Patricia B. Mitchell began foodwriting in the early 1970s as a contributor to The Community Standard magazine in New Orleans. Since 1986 she has authored more than one hundred titles on food and lifestyle history, with well over three-quarters of a million copies sold.