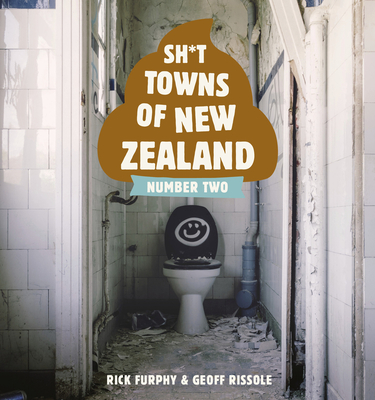 
This title is likely unavailable. Email or call for price and availability.
Based on the hugely popular Facebook page "Shit Towns of New Zealand" this is a detailed catalogue of shit towns and cities across Aotearoa. Naturally, the first volume was received as a literary masterpiece, taking home the prestigious Poolitzer Prize, the Poobody Award, and the Nobel Prize for Shiterature.

The only people upset by the book were the residents of towns that we had missed out. There was only one course of action: we compiled all the towns and suburbs that should probably have been in the first book, added in a bunch of additional material for Kiwis and visitors alike, and did a number two.

As well as hitting more towns, this book is an opportunity to share some of the eloquent fan mail that we have received from the erudite residents of the towns we have reviewed (names may have been altered).

This is Shit Towns of New Zealand Number Two; a complete compendium of New Zealand's crappiest towns . . . continued.
Rick Furphy and Geoff Rissole are two of Australasia's leading self-appointed experts on sociology, travel, and culture. After cutting their teeth as investigative reporters for regional newspapers such as the Asbestos Times and the Gawler Growler, Furphy and Rissole released their debut Sh*t Towns of New Zealand, which won the Poolitzer Prize, the Poobody Award, and the Nobel Prize for Shiterature. The pair's work has attracted controversy—including one district mayor suggesting they be shot—but in the spirit of other true Aussie rebels like Ned Kelly, the Eureka diggers, and Swino the pig, Rick Furphy and Geoff Rissole refuse to let naysayers deter them from their vital work.