Do Something!: 365 Ways You Can Strengthen Canada (Paperback) 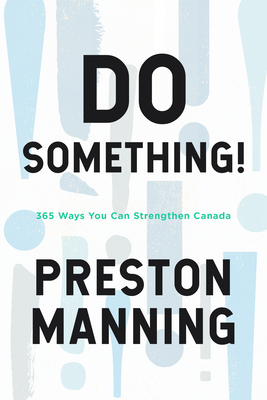 Do Something!: 365 Ways You Can Strengthen Canada (Paperback)


Available in Warehouse. Wait for Email Confirmation for ETA
Politicians, legislatures and parliament are widely mistrusted. Canadians do not see their issues and concerns reflected in the priorities of the people elected to serve them. The rise of populism is one symptom of discontent. Others are low voter turnouts and an increasingly vicious public sphere. It is time for Canadians to repair and strengthen their democracy. It is time to Do Something In this riveting and inspirational book, author and parliamentarian Preston Manning calls on Canadians of all beliefs and allegiances to renew their nation's democracy and the ideas, processes, and institutions that support it. Drawing on a lifetime of public service, he offers 365 practical ways that people can get involved and make a difference, in their communities and on the national stage. "There is an old saying," writes Manning, "that a Canadian optimist is someone who believes things could be worse. But I am an optimist who believes the future can be better if enough of us resolve to make it so.
Preston Manning =============== PRESTON MANNING was a member of the Canadian Parliament from 1993 to 2001. He founded two new political parties--The Reform Party of Canada and the Canadian Reform Conservative Alliance--both of which became the official opposition in parliament and laid the foundation for the present-day Conservative Party of Canada. He is the Founder of the Manning Centre for Building Democracy. He and his wife Sandra divide their time between Calgary, Vancouver, and a family ranch in Saskatchewan.