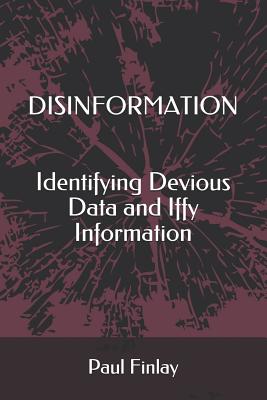 By Paul Finlay
$12.00
Usually Ships in 1-5 Days
This book cannot be returned, cancelled, or exchanged.

What is disinformation? Will fake news fade as fact checkers allow real-time fact checking? Will other, more widespread and insidious forms of disinformation come to proliferate even more than now? Who creates and disseminates disinformation and can it be stopped? During the 2016 US Presidential election campaign Donald Trump popularized the term 'fake news'. Of course he was using the term about other people's news - which is ironic as he is almost certainly the biggest source of fake news in US political history. Whilst all politicians distort to some extent, Trump's way of campaigning went far beyond anything that had been seen before, seemingly with little or no concern for the truth. The term 'fake news' is now almost meaningless as it's often used simply to dismiss any news that's found disagreeable. A better term is disinformation - information intended to deceive or mislead. It's very important to make a distinction between two forms of disinformation - between lies and misleading statements. This book isn't concerned with downright lies. Such fabrications aren't the sort of thing that ordinary people with limited investigative time could be expected to unearth. Fortunately, there are now organisations that are carrying out fact checking and calling out downright lies. Misleading statements are different to lies. They aren't outright falsehoods but arise when someone is being devious, when they are being 'economical with the truth'. Generally, misleading statements have less individual impact than downright lies but they are more insidious and their sheer number means it's impossible for the fact checkers to challenge all but a few of them. These features mean that the reader/viewer is generally on their own when sifting or discounting misleading claims. This book is part of the fight against devious advocacy and disinformation. It's concerned with making the reader aware when tricks are being used and thus be better able to judge the validity of news items. Whilst many examples in the book are from politics, the lessons are applicable to any decision making process, particularly those where numbers are involved. The book will help you:
-identify sleights of hand employed in data selection and data use
-assess the validity of questionnaire reports
-understand the strengths and weaknesses of forecasting
-identify where illogical conclusions are being drawn
-assess the context associated with news items
-assess the credibility of data sources, the authors of news items and the host media channels The people who are likely to appreciate this book are those who aren't versed in data analysis but who would like to be able to more readily interpret the data that's used to advocate particular courses of action. However, it's not only the consumers of information who need to be vigilant. In a world full of instant and often untrustworthy social media it's vital that the standards of the main-stream media can be relied on. Thus another important audience for this book are journalists and other media commentators. Grandiose as it may sound I can do no better than to quote the watchword of The Washington Post - Democracy Dies in Darkness. I hope this book will increase the illumination.