The Four Seasons of the Pipa (Hardcover) 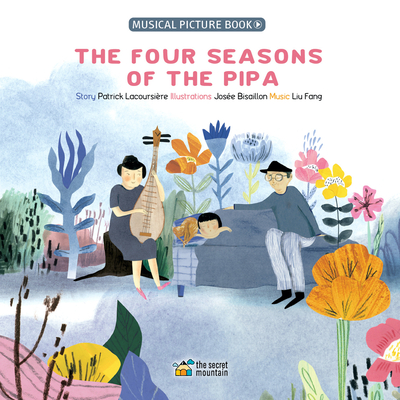 The Four Seasons of the Pipa (Hardcover)


Available for Pre-Order Now
On a cold winter night, a young girl dreams of visiting her faraway grandfather in Kunming, a magical place in China known as the eternal city of spring. As gusts of snow blow outside her window, the gentle sound of her mother plucking the pipa in the family room wraps around her like a warm blanket.

The intricately illustrated story is accompanied by 11 stirring instrumental performances by world-renowned pipa master, Liu Fang. With roots that reach back to the Qin Dynasty, the pipa’s repertoire draws from a wellspring of ancient poetry and folklore, summoning themes of natural splendor that resonate across generations. Notes on the origin of the pipa and each composition appear at the end of the book along with a CD and digital download code.

Josée Bisaillon has illustrated more than 35 picture books, and received several awards and distinctions, including the 2017 Marilyn Baillie Picture Book Award. Her work has twice been shortlisted for the Governor General’s Literary Award as well. Liu Fang is regarded as one of the leading pipa players in the world. Born in Kunming (China) in 1974, she started learning the pipa at the age of 6 and soon began to perform in public as a child prodigy, including a performance for the Queen of England in 1985. She graduated from the Shanghai Conservatory in 1993 and has since appeared throughout the world in several prestigious venues. She performed at the World AIDS Day presented by the BBC World Service, UNESCO’s 60th Anniversary Concert in Paris, and the WOMAD festival in the United Kingdom and Spain. Patrick Lacoursière is a producer and journalist originally from Saskatchewan. He is the author of three stories that make up the award-winning collection Dream Songs Night Songs, published by The Secret Mountain.

"An immersive experience for those willing to look, listen, and dream."—Kirkus Reviews

"A story about family, tradition, and the soothing power of music." —Danielle Ballantyne, Foreword Reviews