The Brain is a Suitability Probability Processor: A macro model of our neural control system (Paperback) 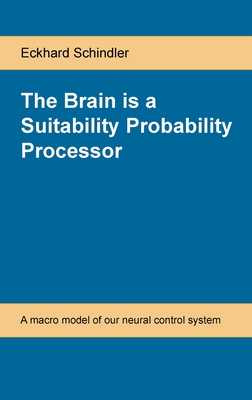 The Brain is a Suitability Probability Processor: A macro model of our neural control system (Paperback)

The world seems to become more complex from day to day. This trend characterizes our daily life - for example by the diversification of product worlds, by a growing jungle of laws, ordinances and regulations as well as by growing international interconnectedness in economy, culture and politics. At the same time, we produce a gain in knowledge and technologies, which has never been seen before. But what grows faster, is the finding of how limited our understanding of the world is. This refers not least to the organ, which we use to meet the continuously complicating matters - our brain. However, the neurosciences make great progress, and they succeeded in explaining lots of phenomena and in treating many diseases. But the findings about how the brain acts as an autonomous system or as a "brain processor" are limited, what not least results from the highly specialized research culture. But how might it be possible to keep control over complex societal processes while our insights into the appropriate control organ are deficient? Eckhard Schindler deals with this topic and tries to highlight some of the systemic artifices, which made the brain the most successful organ of our time. He describes a macro model, which explains how the nervous system intermediates between natural environment, social environment and body, and how it became a medium for pragmatic and creative reflection of nature in neural patterns. A final conclusion is that the brain generates the present-day complexity to a great extent on its own, and that it is thus mostly challenged by requirements that are produced by itself.