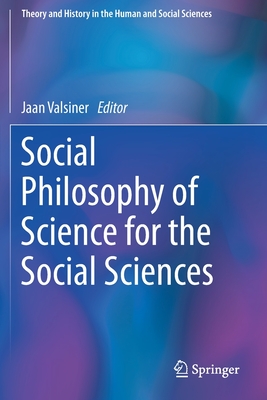 
Available in Warehouse. Wait for Email Confirmation for ETA
Chapter 1. Social sciences between knowledge and ideologies: need for philosophyPart I. Social and cognitive roots for reflexivity upon the research processChapter 2. Social sciences, what for? On the manifold directions of social researchChapter 3. Vitenskapsteori-- - what, how and why?Chapter 4. Culture or Biology? If this sounds interesting, you might be confused.Chapter 5. Conditional Objectivism: A Strategy for Connecting the Social Sciences and Practical Decision-MakingChapter 6. Towards Reflexivity in Science: Anthropological Reflections on Science and SocietyPart II. Philosophies of explanation in the social sciencesChapter 7. Explanation: guidance for social scientistsChapter 8. From causality to catalysis in the social sciencesChapter 9. How to identify and how to conduct research that is informative and reproducibleChapter 10. Explaining social phenomena: Emergence and Levels of ExplanationPart III. Social normativity in social sciencesChapter 11. Normativity in psychology and the social sciences: Questions of universalityChapter 12. The crisis in psychological science, and the need for a person-oriented approachChapter 13. Open access, a remedy to the crisis in scientific inquiry?Part IV. Social processes in particular sciences: challenges to interdisciplinarityChapter 14. Fragmented and Critical? Some challenges for a social organization of Norwegian sociology, and implications for innovationChapter 15. How do economists think?Part V.General ConclusionChapter 16. What can social science practitioners learn from philosophies of science?Index.
Jaan Valsiner is a cultural psychologist with a consistently developmental axiomatic base that is brought to analyses of any psychological or social phenomena. He is the founding editor (1995) of the Sage journal, Culture & Psychology. And Editor-in-Chief of Springer's Integrative Psychological and Behavioral Science. He has been Niels Bohr Professor of Cultural Psychology at Aalborg University, Denmark in 2013-2018 and Professeur invitee at University of Luxembourg (2013-2019). He has published and edited around 50 books, the most pertinent of which are his monographs The guided mind (Cambridge, Ma.: Harvard University Press, 1998), Culture in minds and societies (New Delhi: Sage, 2007), and Ornamented Lives (Charlotte NC: Information Age, 2019). He has been awarded the Alexander von Humboldt Prize of 1995 in Germany, and the Hans-Kilian-Preis of 2017, for his interdisciplinary work on human development, as well as Senior Fulbright Lecturing Award in Brazil 1995-1997. He has been a visiting professor in Brazil, Japan, Australia, Estonia. Germany, Italy, United Kingdom, and the Netherlands.