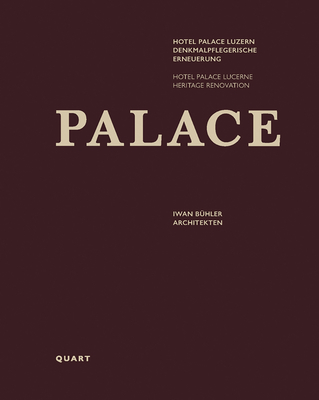 By Iwan Bühler (Editor), Peter Omachen (With), Cony Grünenfelder (With)


Available for Pre-Order Now
This book cannot be returned, cancelled, or exchanged. Please call for availability and pricing
Fully illustrated with 135 images and 31 plansIn 1906, the Hotel Palace was built along Lucerne's prominent Quai Promenade according to plans by Heinrich Meili-Wapf - one of the most important Lucerne architects of the time. The mighty building, which appears as if it were developed out of a single block, is regarded as one of the most important Swiss hotel developments of its time, both due to its pioneering construction and building technology, and due to its architectural design. After several interior conversions that were typical for the times of their implementation, the building was carefully and comprehensively renewed by the Lucerne-based architect Iwan B hler between 2018 and 2022, taking aspects of monument preservation into account. This demanded ideally preserving the existing building fabric, while revealing and reproducing the building's often differentiated and subtle qualities, as well as the wealth of the original building. The work also included carefully renewing individual elements inside and outside the building to accommodate current utilisation.This book documents the original building from 1906 with historical plans and photographs, while shedding light on the hotel's activities and daily life in recent decades. The volume also presents extensive planning and photographic material to demonstrate the strategy and measures applied to the architecturally and historically important building.The exciting project presentation includes illuminating essays by Peter Omachen on the foundation and importance of the original hotel, and by Cony Gr nenfelder, Cantonal Monument Preservation Officer, who followed the refurbishment with an expert and insightful eye.Text in English and German.