Passages of Belonging (Perspectives on Jewish Texts and Contexts #7) (Paperback) 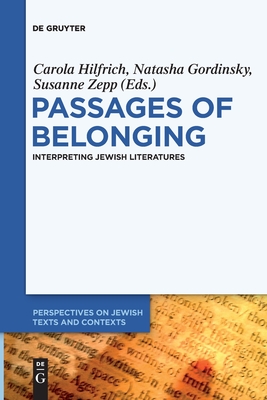 Passages of Belonging (Perspectives on Jewish Texts and Contexts #7) (Paperback)

By No Contributor (Other)

This is book number 7 in the Perspectives on Jewish Texts and Contexts series.

In the wake of the spatial and affective turns in Literary Studies in general, and the study of Jewish literatures in particular, this volume shifts focus from the extensity of exile and return to the intensities of sense of place and belonging across a moving landscape of 20th and 20st century literatures, Jewish and other. It brings together contemporary writers and literary scholars who collectively map these intensities onto a bodily word world in transit and textures of habitable, readable space as passage.Works by H l ne Cixous, C cile Wajsbrot, Alex Epstein, Almog Behar, and Svetlana Boym explore sites made up of layers of passages, taking configurations of sayability and readability as forms, poetic and political, of inhabiting the material world. The contributions by literary scholars explore the theoretical potential of a mapping of such sites in studies of modalities of belonging and unbelonging in modern and contemporary works of literature.The volume collects a collaborative investigation of the exigencies and potentialities of sense of place and belonging through literature, Jewish and other. It offers a literary perspective on current debates in a variety of fields, including literary criticism, human geography, architectural theory, and translation studies.