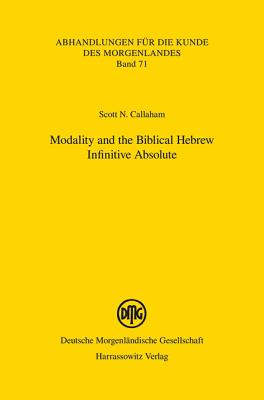 
This title is likely unavailable. Email or call for price and availability.
Alongside several related ancient languages, Biblical Hebrew possesses two infinitive forms. The rarer of the two is the infinitive absolute, for which no analogous structure exists in modern translation receptor languages such as English. In studying its use, Hebrew grammarians have long noted that the infinitive absolute often appears in modal contexts. However, until the present study this phenomenon has not received further scholarly attention. Employing contemporary cross-linguistic research on modality, Callaham's study presents a new and comprehensive analysis of the function of the infi nitive absolute in Biblical Hebrew. Collected data strongly imply that the combination of an infinitive absolute and a cognate verb is a construction expressing verb focus, which includes focus on any modality present in the cognate verb. Infinitives absolute can also function as full substitutes for finite verbs. Accordingly, these independent uses are also highly modal. Through wide-ranging interaction with previous research and exhaustive examination of textual data, this study advances new findings on the interplay of modality and infinitive absolute employment in the Hebrew Bible.