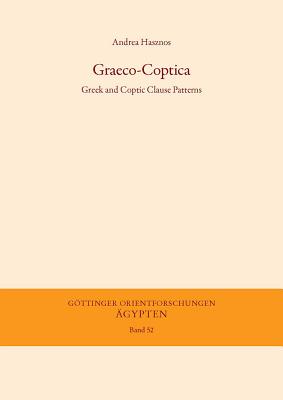 
This title is likely unavailable. Email or call for price and availability.
Coptic scholarship is still quite far from having an agreement on how and where the Egyptian language was affected by Greek. It is indeed an intriguing question whether outside of loanwords Greek had any influence on Coptic. Andrea Haznos' study makes observations on syntax and stylistics in translated and original Coptic literature, sifting out the syntactic patterns showing Greek influence in one or both text groups, showing how certain patterns came to be used in Coptic clearly through translations, and raising the question whether those syntactic influences which came to the Egyptian language through the bilingual situation can be detected with certainty. With these observations the author helps develop the criterium system needed to determine whether a Coptic text was written in Coptic or Greek originally. While examining the final clauses, consecutive clauses, object clauses/infinitive constructions after verbs of exhorting and subject clauses/infinitive constructions from the point of view of syntactic graecism in translations and in original Coptic texts, valuable observations on Coptic dialects (esp. Sahidic, Mesokemic, Lycopolitan) and their relations are also made.