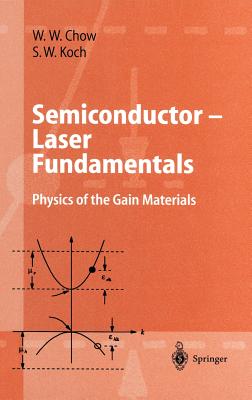 
Available in Warehouse. Wait for Email Confirmation for ETA
This book cannot be returned, cancelled, or exchanged. Please call for availability and pricing
Since Fall of 1993, when we completed the manuscript of our book Semi- conductor-Laser Physics W.W. Chow, S.W. Koch, and M. Sargent III (Springer, Berlin, Heidelberg, 1994)] many new and exciting developments have taken place in the world of semiconductor lasers. Novel laser and ampli- fier structures were developed, and others, for example, the VCSEL (vertical cavity surface emitting laser) and monolithic MOPA (master oscillator power amplifier), made the transition from research and development to production. When investigating some of these systems, we discovered instances when de- vice performance, and thus design depend critically on details of the gain medium properties, e.g., spectral shape and carrier density dependence of the gain and refractive index. New material systems were also introduced, with optical emission wave- lengths spanning from the mid-infrared to the ultraviolet. Particularly note- worthy are laser and light-emitting diodes based on the wide-bandgap group-III nitride and II VI compounds. These devices emit in the visible to ultra-violet wavelength range, which is important for the wide variety of optoelectronic applications. While these novel semiconductor-laser materi- als show many similarities with the more conventional near-infrared systems, they also possess rather different material parameter combinations. These dif- ferences appear as band structure modifications and as increased importance of Coulomb effects, such that, e.g., excitonic signatures resulting from the at- tractive electron-hole interaction are generally significantly more prominent in the wide bandgap systems.