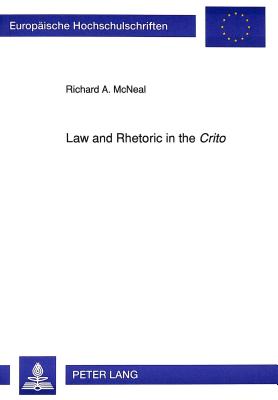 By Richard A. McNeal


This title is likely unavailable. Email or call for price and availability.
In the "Crito" Plato deliberately confuses positive and natural law. He wants his readers to ponder the complexities of political obligation in a one-world universe in which the human microcosm, to which Athens belonged, was an integral if subordinate part of the divine macrocosm. As an apologia for Plato's own developed metaphysical theory, which is put into the mouth of Socrates, the "Crito" depends for its successful appeal on the conventions of rhetoric, not upon formal logic. Because Plato dresses his own revolutionary notion of political virtue in the language of Athenian politics, modern readers make the mistake of assuming that the "Crito" is a straightforward treatise in which its author sets out the views of his mentor with historical accuracy.
The Author: Richard A. McNeal received the Ph.D. in Classics from Stanford University in 1968. He has taught at the University of California at Riverside and at Northwestern University and is now at Franklin and Marshall College in Lancaster, Pennsylvania.