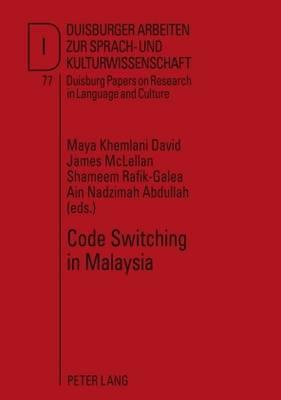 This is book number 77 in the Duisburg Papers on Research in Language and Culture series.

Code switching seems to be natural for most multilingual speakers because they can switch from different languages freely depending on what is available in their linguistic repertoire. This collection of studies aims to bring current Malaysian code switching and language alternation research to the attention of a worldwide readership. In so doing we attempt to follow the path taken by our late friend, colleague and mentor, Professor Rodolfo Jacobson. The approach and conceptual framework adopted by the contributors in this volume tends to focus more towards the functional rather than the purely linguistic or grammatical. Research into Malaysian code switching demonstrates the need to seek out ways of merging these approaches, rather than keeping them separate, and several of the chapters in this volume attempt such a merger of approaches and methods.
The Editors: Maya Khemlani David is currently Head of the Section for Co-Curricular Activties, Elective Courses by Other Faculties and TITAS (SKET), University of Malaya (Malaysia). She has published in reputable journals like the International Journal of the Sociology of Language and Multilingua and has edited Language and the Power of the Media (2006, Frankfurt, Peter Lang), and Teaching of English in Second and Foreign Language Settings: Focus on Malaysia (2004, Frankfurt, Peter Lang). James McLellan is a lecturer in Applied Linguistics at the University of Waikato, Hamilton (New Zealand). He worked at University Brunei Darussalam from 1989-2002. He holds a Ph.D. from Curtin University of Technology, Perth (Australia). His research interests include Malay-English code switching, Language Maintenance and Shift in Borneo, and South-East Asian varieties of English. Shameem Rafik-Galea is an Associate Professor in the Department of English, Faculty of Modern Languages and Communication, University Putra Malaysia. Her research interests are in the area of Management Communication, Organisational Business Discourse, English for Specific Purposes and Sociolinguistics. She has published and presented papers in her areas of interest. Ain Nadzimah Abdullah teaches at the University Putra Malaysia. Her research interest is primarily in language planning and policy, but she has also worked on bilingualism and language choice. A long-standing focus has been the diglossic relationship between Malay and English in Malaysia.