111 Places in Boston That You Must Not Miss (Paperback) 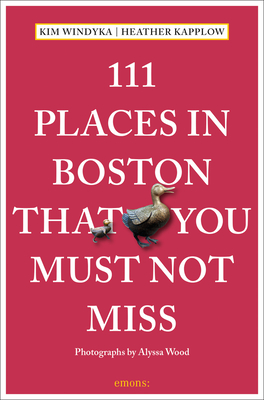 111 Places in Boston That You Must Not Miss (Paperback)


Available in Warehouse. Wait for Email Confirmation for ETA
- The ultimate insider's guide to Boston- Features interesting and unusual places not found in traditional travel guides- Part of the international 111 Places/111 Shops series with over 250 titles and 1.5 million copies in print worldwide- Appeals to both the local market (more than 690,000 people call Boston home) and the tourist market (more than 19 million people visit Boston every year )- Fully illustrated with 111 full-page color photographsFaneuil Hall is fine and the duck boats are just dandy, but if you want to go beyond the Boston of brochures and get to the heart of this mysterious, charming old metropolis, you have to dig deep and be willing to get a little weird. 111 Places in Boston That You Must Not Miss is a guidebook with a twist: one that takes you far off the beaten path - and the Freedom Trail - to explore a side of the city that's offbeat, unexpected, and completely fascinating for visitors and locals alike. Whether you want to pay your respects at the memorial for a fictional character, sneak behind a vending machine to go shopping for sneakers, marvel at the breathtaking views from a brewery bathroom, or go on a long, strange trip through an LSD library, you can do it all here... and before dinnertime, to boot. Throw on your Red Sox cap, hop on the T, and uncover some secrets along the way.
Heather Kapplow (www.heatherkapplow.com) is one of the rarest kind of creatures you will find in Boston: a native Bostonian. A visual and performing artist as well as a writer, Heather travels frequently for projects in both spheres and has a very deep understanding of what it's like to be a newcomer in an unfamiliar city. It's among Heather's life goals to make Boston a more welcoming place, as well as to throw spotlights on Boston's many nuanced subcultures. You can find anything you need in Boston (except maybe a parking space in the winter) if you seek it out - take it from a native. Kim Windyka fell in love with Boston while growing up in nearby southern New Hampshire, and has never become tired of the city's beauty and historic charm in the 12 years she's been living there since attending Emerson College. A full-time copywriter with experience in multiple industries including travel, tech, and fashion, she has also written pieces for The Atlantic, New York Magazine, McSweeney's, and more. See more of her work at www.kimwindyka.com and follow her on Twitter at @kimlw.