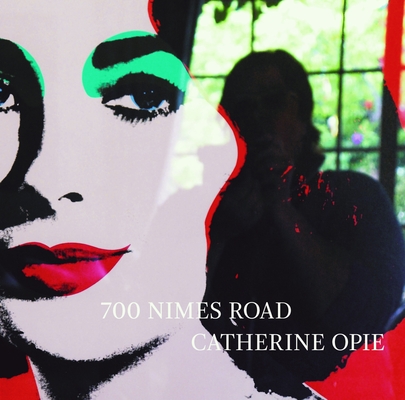 
Backordered - ETA Unknown
The renowned photographer Catherine Opie takes on a challenging documentary project— an "indirect portrait" of Elizabeth Taylor through her home and possessions. One of America’s most celebrated living photographers, Catherine Opie works in series that are remarkably varied in
both style and subject matter—from intimate portraits of the
LGBTQ community to beautiful, nearly-abstract landscapes
featuring ice-fishing houses. Expanding that astonishing
range of subjects further is Opie’s ambitious recent series of
photographs taken at the home of late movie star Elizabeth
Taylor. Though glamour and celebrity are not common
themes in her work, Opie was inspired by the possibilities this
project offered—recalling William Eggleston’s series on Elvis
Presley’s Graceland, or her own photographs of Obama’s
2008 inauguration, both of which represent indirect portraits
of their subjects. The images in this moving collection
were culled from photos Opie took over the course of six
months, both on the grounds of and inside Taylor’s home.
The subjects are wildly diverse—a dog-eared remote control
manual, close-ups of Taylor’s enormous closets, shelves of
tchotchkes and priceless works of art—telling more about
Taylor’s life than any "celebrity" portrait ever could. Through
Opie’s thoughtful curation, Taylor’s home tells a poignant
story and reveals the arc of a fascinating life.
"Midway through the project [Elizabeth Taylor] was hospitalised, and on March 23 2011 she passed away. As an artist it was an emotional and moving time for me to bear witness to her life and to her loss. Her home underwent many changes following her death. These photographs reflect that transition in a subtle way, while still maintaining an intimate portrait of Elizabeth Taylor through her personal space."—Catherine Opie, as quoted in the Financial Times

"Liz Taylor never let a photographer into her home—until Catherine Opie came along. The result is as visual paean to the life (and loss) of a legend . . . Flipping through [700 Nimes Road], you feel a little like a child stealing into her mother's room to run her hands over dresses and rummage through drawers. All that’s missing is the scent of Taylor's perfume."—Town & Country

"Not long before she passed away in 2011 at age 79, Elizabeth [Taylor] opened up her surprisingly cozy six-bedroom, six-bath LA house to photographer Catherine Opie. The spectacular results can be found in the new book and exhibition named after the actress' Bel Air address, 700 Nimes Road . . . And while the space is every bit as stunning as the actress herself, Opie points out that it 'wasn't just pristine—it was a well-loved and well-used home, too . . . Everything had value to her, from the Krupp Diamond ... to the stuffed animal that leaned against a little rocker.'" —Closer

"Although the two never met in person, Opie’s new book . . . assumes a powerful, shared intimacy through [her] pictures of Taylor’s shoes, jewelry, heirlooms, and other artifacts of fame and family." —WMagazine.com

"She was one of the most photographed women in the world—but these quiet pictures of her Bel Air home, which she allowed just before her death in 2011, reveal more about Elizabeth Taylor than any portrait."—People Magazine

“Catherine Opie’s photographs of Elizabeth Taylor’s curtains, closet, and kitchen—taken in 2010 and 2011, the year that Taylor died—are elegiac and stately, and deeply revealing of Taylor’s interior life.” —Alex Abramovich, The New Yorker