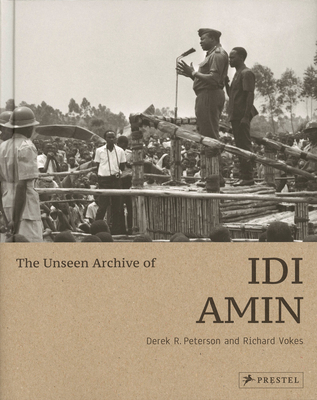 
Available in Warehouse. Wait for Email Confirmation for ETA
This trove of recently discovered photographs offers an unprecedented opportunity to take a closer look at Idi Amin's dictatorship and its impact on Ugandan history.

Chosen from a collection of 70,000 negatives from the archive of the Uganda Broadcasting Corporation, the images in this remarkable collection were taken by Amin's personal photographers between the 1950s and mid-1980s. Like many dictators, Amin used photography as a means of spreading propaganda that would flatter his regime while obscuring its failures and abuses. Organized into thematic sections, these photographs show how Amin sought to gain support for acts such as his expulsion of tens of thousands of South Asians in 1972 and for the "Economic War," in which citizens charged with petty theft were tried and executed. There are also fascinating insights into the ways Amin hoped to promote Ugandan arts and culture, including a food-eating competition in Kampala and ceremonial visits to
remote villages. The book includes revelatory archival documents recently unearthed concerning the Amin government. Essays by the authors, both experts in the field, help provide a context for the archive, as well as insights into how the lessons learned from this dark period of African history can shine a light towards a brighter future for Uganda and its people.
DEREK PETERSON is Professor of History, African and Afro-American Studies at the University of Michigan. He has edited books about the Atlantic slave trade, the history of journalism, and the politics of the heritage business in Africa. For the past decade he is been working with Ugandan colleagues to make government archives accessible to citizens and scholars. He lives in Ann Arbor, MI.

RICHARD VOKES is Associate Professor of Anthropology and Development at the University of Western Australia. He has long-standing research interests in Uganda, especially in the fields of visual and media anthropology. He is an Editor of the Journal of Eastern Africa Studies, and former President of the Australian Anthropological Society. He lives in Perth, Australia.