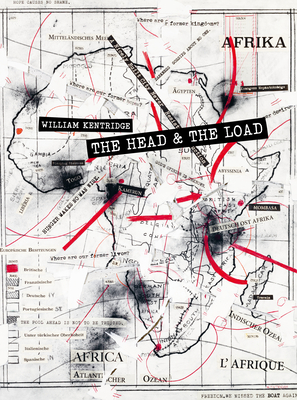 
This title is likely unavailable. Email or call for price and availability.
Explore William Kentridge's remarkable performance piece, The Head & The Load, and discover how music, dance, writing, and fine art are combined to tell the haunting story of Africans during WWI.

For over thirty years, William Kentridge has been combining fine arts, performance, theatre, and opera to create dreamlike, political, and humanist works. His installations , films, and drawings often deal with the political situation in South Africa, apartheid, and the consequences of colonialism. This book gives an in-depth examination of his performance piece The Head & The Load, which explores the role of Africa during World War I. Throughout the war, more than one million Africans carried provisions and military equipment in hazardous conditions for British, French, and German troops at minimal or no pay. William Kentridge tells the story of these African porters who ensured the success of the victors, but remain in the shadows. This history, rarely studied today, unfolds in a staged tableau combining music, dance, acting, screenings, and mechanized sculptures. The book includes photos and text from the performance, essays, and artworks created specifically by Kentridge to complement the play. Accompanied by an international cast of singers, actors, and dancers, and with music composed by Philip Miller, The Head & The Load is a powerful and multifaceted work that reconsiders colonial history and its repercussions in today's world.
WILLIAM KENTRIDGE is a South African artist internationally renowned for his prints, drawings, and animated films. His artworks are in many collections, including Tate Modern in London, the Museum of Modern Art in New York, and the Centre Pompidou in Paris. His "spectacle-performances," including The Head & the Load, have been shown at the Festival d'Avignon (2012), the thirteenth documenta in Kassel, and MassMOCA, among other prestigious festivals and venues.