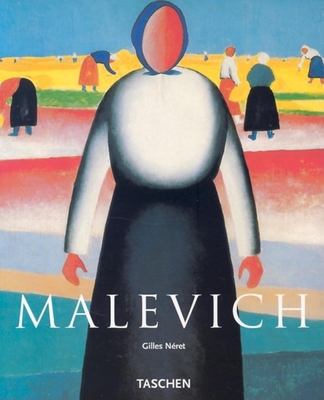 
This title is likely unavailable. Email or call for price and availability.
The supremacy of pure feeling Dabbling in fauvism and cubism before founding the Suprematist movement, Russian painter and sculptor Kasimir Malevich (1879-1935) was a leading figure of the avant-garde and a pioneer of the non-objective style that he felt would "free viewers from the material world." In 1915, the same year he produced his most famous painting, "Black Square," he published the manifesto From Cubism to Suprematism. To critics who accused his work of being devoid of beauty and nature, he responded "art does not need us, and it never did." His 1918 painting "Suprematist Composition: White on White," one of the most radical artworks of its time, fetched $60 million at auction in 2008.
The supremacy of pure feeling About the Series:
Each book in TASCHEN's Basic Art series features:
The author:

Gilles Neret (1933-2005) was an art historian, journalist, writer and museum correspondent. He organized several art retrospectives in Japan and founded the SEIBU museum and the Wildenstein Gallery in Tokyo. He directed art reviews such as L'OEil and Connaissance des Arts and received the Elie Faure Prize in 1981 for his publications. His TASCHEN titles includeSalvador Dali The Paintings, Matisse, and Erotica Universalis.