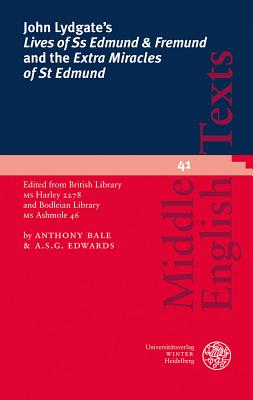 
This title is likely unavailable. Email or call for price and availability.
John Lydgate wrote the 'Lives of Ss Edmund & Fremund' at the request of his abbot, William Curteys, to commemorate the stay of the young King Henry VI at the Benedictine abbey of Bury St Edmunds from Christmas Eve 1433 to shortly after Easter 1434 when Henry was received into confraternity. The work survives in thirteen manuscripts or fragments, and BL MS Harley 2278, on which the present edition of the 'Lives of Ss Edmund & Fremund' is based, was the copy of the poem presented to Henry VI, probably before 1444. The 'Lives' consists of a prologue, the Life of St Edmund as books one and two, the Life of St Fremund as book three, a conc1uding prayer to St Edmund, an envoy, and an address to Henry VI. The volume also presents the three texts that make up the 'Extra Miracles of St Edmund' which are found in four of the later manuscripts of the 'Lives' and independently in one manuscript. This edition of the 'Lives of Ss Edmund & Fremund' is the first to establish the text on the basis of the readings of all the manuscripts, and is also the first to include the 'Extra Miracles'. The edited texts are followed by a commentary, textual notes, a glossary of proper names, and a selective glossary.