Helmut Newton and Alice Springs. Us and Them (Hardcover) 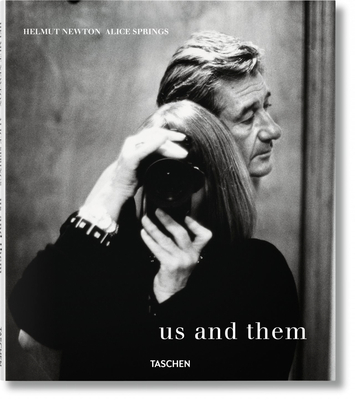 Helmut Newton and Alice Springs. Us and Them (Hardcover)

Us and Them is an ode to partnership and art. First published in 1999, it gathers photographs by Helmut Newton and his wife, the actress and photographer June Newton, who worked under the pseudonym Alice Springs. The collection is arranged into five sections, alternating the gaze between Newton and Spring's own tender internal world of "Us," and the glamorous encounters of their social and professional milieu--"Them."

The "Us" sections of the book reveal the pair's portraits of each other and themselves, as startling in their moments of vulnerability as they are infectious in their episodes of joy. We see the pair pensive, weary, or roaring with laughter. Alice photographs Helmut on set with his models, in the shower, and in stilettos. Helmut captures Alice in the kitchen, in costume, and hanging up the washing in the nude. Along the way, we are alerted to the frailties and intimacies that make up a long-term partnership, which coexisted with the high-voltage glamour for which Newton is renowned. The particular power of the pictures is to locate as much magnetism and beauty in an aging, ailing partner (Helmut in the hospital, Alice adjusting her spectacles), as in the pristine physiques of a Newton fashion shoot.

In the concluding "Them" section, Newton and Springs each turn their lens on the same, typically famous, subjects, including Catherine Deneuve, Charlotte Rampling, David Hockney, Dennis Hopper, Karl Lagerfeld, and Timothy Leary. While Newton casts these subjects with his unique brand of statuesque allure, Springs deploys a softer focus to find something more suggestive, delicate, or playful.

As we move from, in Newton's words, "truth and simplicity" to "editorializing," through youth and age, love and sex, and the public and private spheres, this new edition of Us and Them offers not only an elegant example of independent visions within a shared life, but also a tender and inspiring chronicle of love through passing time.