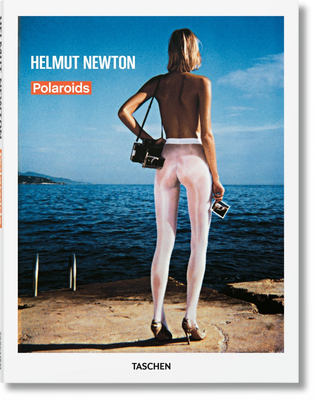 
This title is likely unavailable. Email or call for price and availability.
Polaroids occupy a special place in the hearts of many photo enthusiasts who remember a time when "instant photography" meant one-of-a-kind prints that developed within minutes of clicking the shutter. What was once a crucial tool for photographers to test their shots before shooting on film has now become obsolete in the face of digital photography. Luckily for us, legendary photographer Helmut Newton saved his test Polaroids, allowing a privileged and rare chance to see the tests from a selection of his greatest shoots over a period of decades, including many from the TASCHEN titles SUMO, A Gun for Hire, and Work. Selected by his widow, June Newton, from over 300 photos featured at the 2011 exhibition "Helmut Newton Polaroids" at the Museum f r Fotografie in Berlin, this collection captures the magic of Helmut Newton photo shoots as only Polaroids can.
Helmut Newton (1920-2004) was one of the most influential photographers of all time. Born in Berlin, he arrived in Australia in 1940 and married June Brunell (a.k.a. Alice Springs) eight years later. He first achieved international fame in the 1970's while working principally for "French""Vogue," and his celebrity and influence grew over the decades. Newton preferred to shoot in streets or interiors, rather than studios. Controversial scenarios, bold lighting, and striking compositions came to form his signature look. In 1990 he was awarded the "Grand Prix national de la photographie"; in 1992 the German government awarded him "Das Grosse ""Verdienstkreuz" for services to German culture, and he was appointed "Officier ""des Arts, Lettres et Sciences" by S.A.S. Princess Caroline of Monaco. In 1996, he was appointed "Commandeur de l'Ordre ""des Arts et des Lettres" by Philippe Douste-Blazy, the French Minister of Culture at the time. Working and living in close companionship with his wife until his death at 83, his images remain as distinctive, seductive and orginal as ever.