In Search of Sherpur: An Immigrant's Memoir (Paperback) 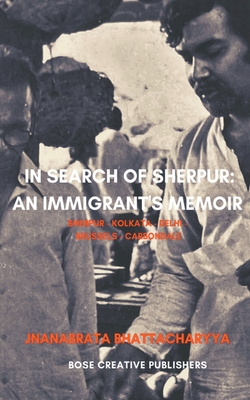 In Search of Sherpur: An Immigrant's Memoir (Paperback)

In Search for Sherpur: An Immigrant's Memoir

My supposedly one month Christmas vacation to Calcutta became a lifelong homelessness. I was just promoted to Class IX which was in charge of the annual school Saraswati Puja. I had stood first. I had bought my new text books, which, alas, I would never read. The shift to Calcutta was the start of a cascading series of changes. I became distant from Ma. My voice had broken when we were in Bhowanipur, at Dada's in law's house. When Ma came a few months later I was shy to go to her. This was pretty weird: I was the baby boy There fell a screen of self- consciousness that never lifted. I loved her, I worshipped her, but I stopped being as natural to her as, say, Sonada. We shifted from house to house, and after Didi's marriage, in 1952, had lost all center. Our family as I had known it in Sherpur had come apart. Baba died in 1954. In tandem with our family disorganization came economic distress. So we the younger boys did what we could on our own devices. My own journey to MA and beyond is rationally inexplicable. Maybe the four years in Kenderdine Lane madly reading continental literature and meeting a wide diversity of people had something to do with it. I was tired of our poverty and the apathy about it. I think I broke free by deciding to study for MA, at the very young fresh faced Jadavpur University, in 1957.

Sherpur was Home That inexplicable place. I have traveled in six continents, happily and enjoyably. I have lived in three. I am still searching for my home.