Visions of the Now: Stockholm Festival for Art and Technology (Paperback) 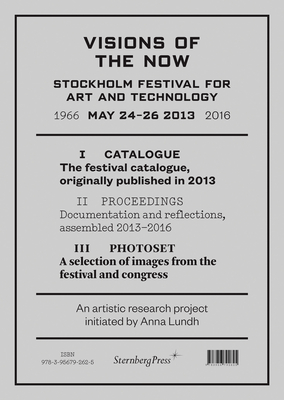 Visions of the Now: Stockholm Festival for Art and Technology (Paperback)


This title is likely unavailable. Email or call for price and availability.
Initiated by Swedish artist Anna Lundh, Visions of the Now is a reconsideration of the 1966 Stockholm festival Visioner av Nuet (Visions of the Present), which aimed to examine the impact of technology on humanity, society, and art; half a century later, we are immersed in the technology that was still “new” in 1966. Lundh's project took place in 2013 and brought together international artists, musicians, theorists, and scientists for a three-day festival of lectures, panels, performances, sound pieces, installations, and screenings. What, it asked, are our current visions of the now, and how do we imagine the future?

This two-volume set marks the fiftieth anniversary of Visioner av Nuet and contains the catalogue and proceedings of the 2013 festival, new contributions by the invitees, and photo documentation. Archival material from the 1966 festival, with never-before-published correspondence with John Cage and Buckminster Fuller and texts by Alvin Lucier and Nam June Paik, is featured along with the connected history of the 1966 New York festival, 9 Evenings of Theatre and Engineering.