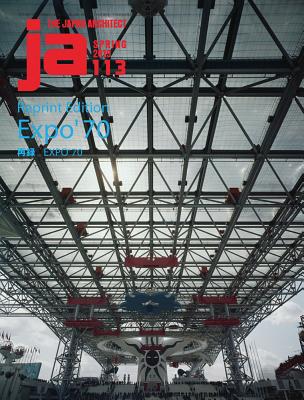 By The Japan Architect (Editor)


This title is likely unavailable. Email or call for price and availability.
Expo '70 in Osaka was conceived in the late 1960s when the world was facing changing values in the midst of social and cultural turbulence. JA 113 is a reprint of selected articles originally published in the May 1970 issue of Shinkenchiku and May/June issue of JA, in commemoration of the upcoming Osaka-Kansai Expo 2025. The emphasis on high tech environments was evident in the Space Frame by Kenzo Tange which housed the Tower of the Sun by Taro Okamoto. The possibilities of advanced engineering were showcased by the Expo Tower by Kiyonori Kikutake and the air supported dome of the United States pavilion. Another highlight was the first ever IMAX film shown in the Fuji Group Pavilion by Yutaka Murata. All of these elements were part of a site master plan created by Kenzo Tange and Uzo Nishiyama. Text in English and Japanese.
JA the Japan Architect was first published in June 1956 and was the only English language periodical that introduced Japanese architecture to an overseas audience. Since 1991 it has been published as a quarterly journal in both Japanese and English, expanding its readership both inside and outside of Japan. Today's JA showcases contemporary Japanese architecture with in-depth commentary on the theoretical history and context of the projects. It is organized with an emphasis on developments originating in Japan. The magazine surveys the country's diverse, ever-changing architectural scene, identifies important trends to convey to a wider audience outside Japan, takes up current, compelling issues and considers the latest architectural trends.