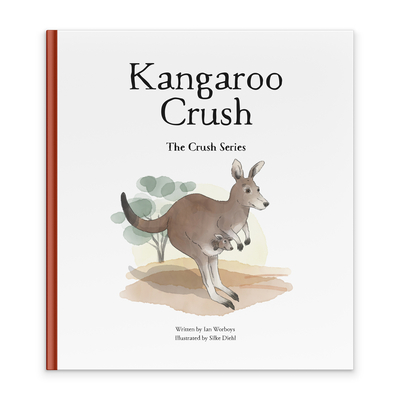 
Available in Warehouse. Wait for Email Confirmation for ETA
This hopping story, set in the Australian desert, shows a day in the life of a group of unique animals, some of whom are not found anywhere else in the world.

Kangaroo Crush is part of the Crush series, a beautifully illustrated series of rhyming children’s books.

The story begins with a relaxed koala enjoying eating his eucalyptus leaves as he watches the world go by. Between stretching, crawling and yawning, Koala watches as things get interesting! A munching bug, a water dragon lizard, an emu, and a mother kangaroo with her joey all then enter the story

The irresistible and humorous illustrations capture the wild beauty and vitality and what is unique and wonderful about these small and large creatures. Using gentle rhyme and humor the book explores the circle of life, and the diversity and fantastic colors of the fauna and landscape of Australia.

Imagine a world where colorful animals live and play enjoying the sun and looking for food while trying to avoid becoming lunch themselves. The Crush Series demonstrates interconnectedness by sharing humorous stories in which each animal's action can affect all the characters in the story. The books are full of hilarious situations where the unexpected can and will happen.
As a father of four, Ian Worboys found himself looking for fun books preferably written in rhyming poetry, to help him connect to his children, entertain them, and more importantly develop their imagination and creativity. Unable to find such books on the shelves of his local bookshop, he started writing the stories himself. Some 100 poems later the Crush Series began. As an interior architect and mother of three children, Silke Diehl learned that playful parenting is the key to children's hearts and minds. Much like Ian, Silke had brought up her three children to express their feelings and to be creative. Silke's gentle, charming, and humorous illustrations brought Ian's stories to life and it was Silke who had the inspiration to add a song to each book.