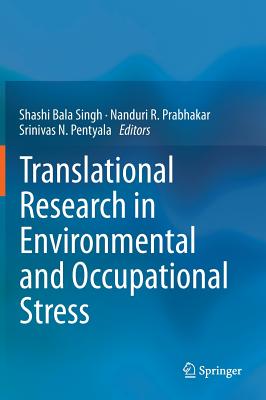 Cutting edge technologies can propel a simple finding in basic science to a concept that can be of immense value to the society. While applying novel techniques to unravel the mysteries of biological processes, an offshoot of applied branch emerged. This field, which is now widely referred to as Translational Research utilizes basic science findings and translates these findings into innovative concepts for the benefit of mankind. This branch of science has evolved into a multidisciplinary juggernaut encompassing all known fields of science as varied as biomedicine, environment, law, economics, sociology, etc. With the ever increasing interest in this branch and the dreams and aspirations that this field can bring, basic science researchers are now taking a bold step into this new realm, merging different fields of knowledge to come up with novel inventions. This book Translational research in environmental and occupational stress provides and insight into the research that led to discoveries, inventions and development of novel technologies which will have a tremendous impact on the future of mankind.

Dr. Shashi Bala Singh, Outstanding Scientist and Director, Defence Institute of Physiology and Allied Science (DIPAS), obtained her Ph.D. degree in Human Physiology from All India Institute of Medical Sciences, New Delhi and started her career in DRDO at DIPAS, Delhi as scientist 'C'. She also served as Director, Defence Institute of High Altitude Research (DIHAR), Leh, before taking over as Director, DIPAS. She has immensely contributed to the understanding of high altitude physiology and pioneered the development of nutraceuticals and prophylactics for several high altitude maladies that include hypophagia and cognitive impairment. She has developed supplementation with antioxidant and cholinomimetic drugs to improve high altitude induced impairment in cognitive functions. She has been instrumental in devising technologies for improving the quality of life in extreme environmental conditions of the combatants. Some of the pertinent products include zero energy based solar shelters, Sourja; improvised space heating devices and microclimate controlled oxygen enrichment enclosure. She received "Scientist of the Year Award" by Hon'ble Prime Minister in year 2010 and is the elected Fellow of National Academy of Sciences, India (FNASc.), Indian Association of Biomedical Scientists (FIABMS) and Indian Academy of Neuroscience (FIAN). She is the President of Federation of Indian Physiological Societies (FIPS) and also holds the editorship in many prestigious journals.Nanduri R. Prabhakar received his Ph.D and D.Sc in Physiology from the M.S. University, Baroda, India and Ruhr University, Bochum, Germany, respectively. He was a fellow of the Swedish Institute at the Nobel Institute for Neurophysiology, Karolinska Institute, Stockholm. He joined the Case Western Reserve University, Cleveland, USA in 1984 as an Assistant Professor and became Professor and Vice-Chairman of the Department of Physiology (1997-2007). In 2007, he joined the University of Chicago and is currently Harold H. Hines Professor and Director, Institute for Integrative Physiology and Center for Systems Biology of O2 Sensing at the same university. He is a leading authority on O2 sensing mechanisms and physiological consequences of hypoxia. He is the Director of Program Project Grant funded by the National Institutes of Health, USA and published more than 230 papers and edited 7 books.Dr. Srinivas Pentyala is a faculty member of anesthesiology, urology, health sciences, physiology and biophysics at Stony Brook Medical Center, NY. He is also the Director for Translational Research in Stony Brook's Anesthesiology Department where he is working on several applied projects, including drug discovery, diagnostic markers and devices for health care settings. His research has received funding from both public and private sources. Dr. Pentyala has several publications and patents to his credit and also received numerous honors and awards.