Soft Power of Japan's Total War State: The Board of Information and D Mei News Agency in Foreign Policy, 1934-45 (Paperback) 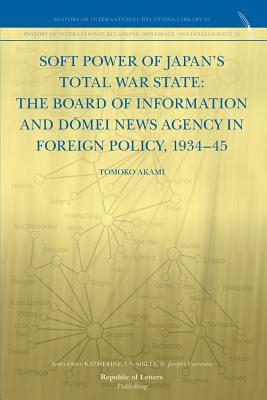 By Tomoko Akami
Email or call for price & availability
Usually Ships in 1-5 Days
This book cannot be returned, cancelled, or exchanged.

History of International Relations, Diplomacy and Intelligence, 22 (History of International Relations Library, 33) Using extensive archival documents and recently reprinted documents, Soft Power of Japan's Total War State, 1934-45 locates Japan's information policy as a part of its foreign policy in a global context, and concludes Japan's News Propaganda and Reuters' News Empire in Northeast Asia. Soft Power of Japan's Total War State for the first time reveals systematically how Japan's policy elites understood global trends of mass politics, technological changes, and new international norms; how they viewed 'information' as soft power in foreign policy; how they institutionalized key organizations for their envisaged total war state in the critical period of modern Japanese history; and how Japan came to briefly dominate news in Asia and the Pacific during the war. The Board of Information (1940-45) was created with the intention of managing centrally all civilian information-relevant activities for the total war state. Contrary to an orthodox view, its priority continued to be external affairs, rather than domestic thought control. The national news agency, Do mei News Agency (1936-45), was its key operational agency, and played a key role in information management in the Japanese occupied China and Southeast Asia in 1942-45. These Japan's foreign policy elites were in no way isolationists, well attuned to global trends, learning from policies and institutions of various countries, and responding to them. Such global thinking, however, did not lead them to the opposition to imperial war. The book also suggests that there were many parallels with other countries. TABLE OF CONTENTS Acknowledgements List of figures: diagrams, maps, pictures and tables List of abbreviations Note on conventions Introduction Ch. 1: A New Era of News Propaganda and Japan's Foreign Policy, 1933-4 Ch. 2: Who Controls Information for Foreign Policy?: The Cabinet Information Committee and the National News Agency, Dōmei, 1935-6 Ch. 3: Konoe's Vision and the Army's Vision for a Total War State: The Cabinet Information Department and the Outbreak of War with China, December 1936-November 1937 85 Ch. 4: The Cabinet Information Department and News and Cultural Propaganda, July-December 1937 Ch. 5: The Emergence of the Comprehensive Propaganda Scheme: Japan's Propaganda Operations and Dōmei in Wartime China and Beyond, 1938-40 Ch. 6: The Making of the Board of Information and the Total War State, Tokyo, May-December 1940 Ch. 7: The Board of Information's Vision for a News Empire in Southeast Asia, April 1940-June 1942 Ch. 8: Japan's News Empire: Dōmei in Occupied Southeast Asia, 1942-5 Ch. 9: The Board of Information and Dōmei during the Pacific War, Tokyo, 1942-45 Ch. 10: The End of the Board of Information and Dōmei as Foreign Policy Organizations, August-December 1945 Conclusion Archival Sources Bibliography About the Author: Tomoko Akami, Ph.D. (1959) is at Pacific and Asian History at the ANU College of Asia and the Pacific at the Australian National University. She has published on history of international relations in Asia and the Pacific region, internationalism, inter-imperialism, liberalism, and international organisations of the region, including Internationaizing the Pacific (Routledge 2002), Japan's News Propaganda (RoL 2012).