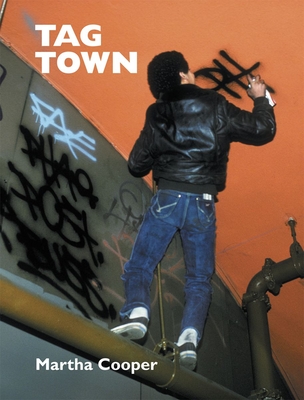 Tags are designed street names, written in the public domain. They are one of the most despised phenomena since long hair on men. They have burrowed their way into the big cities of the world, working both to annoy and tell stories. Now, they tell the tale of how the biggest and most vital artistic trend of the late 20th century originated among children and youths. Martha Cooper documented New York subway paintings in the book Subway Art (1984). But she most preferred tags, the bastard siblings of the pieces, because of their raw energy. Tags are the blue print and uncouth offspring of graffiti writing culture. Cooper went exploring, and found a gold mine just a few blocks from her home The earliest tags in New York were developed in Washington Heights, North Manhattan, and ten years later, Martha was there with her camera. She documented backyards, bridge supports, parks and pedestrian tunnels with the precision of an ethnographer. The walls were still full of tags from the 60s and 70s, a forgotten gallery. The pictures have lain in Martha's photo archive since then. Featuring interviews with oldschool writers Part 1 and Snake 1, pioneers of the early 70s New York writing scene, and essays on tags and calligraphy, Tag Town is the first book to show early tags in their context. Even in the early 70s, all the basic forms that still appear in modern graffiti writers' work, were there. Tag Town is a lesson in reading tags for beginners, and an eureka moment for the experienced writer. Martha Cooper has documented hip-hop culture since 1980. She is the author of books such as Subway Art, Hip Hop Files, We B Girlz and Street Play.