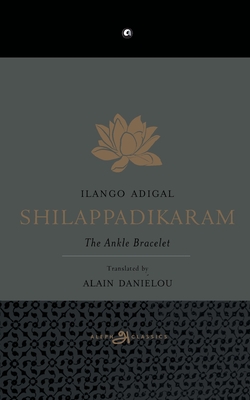 By Ilango Adigal
$20.24
Usually Ships in 1-5 Days
This book cannot be returned, cancelled, or exchanged.

Shilappadikaram or the Ankle Bracelet is one of the five major epics of Tamil literature. It was composed as a verse romance in Tamil by Ilango Adigal, a Jain prince who lived in the second century ad and was one of the most renowned classical poets of ancient India. Shilappadikaram is a tale of wonders and misfortunes, of hapless mortals and capricious deities, of magic and heroism in a bright but also cruel world in which the law of karma rules and where 'actions committed in past lives must always bear fruit'. Thus the peerless young Kovalan will leave his loyal wife Kannaki for the courtesan Madhavi and though he returns to her, still meets his death because of her ill-omened ankle bracelet. It has been called an epic and even a novel, but it is also a book of general education. Ilango packed his story with information: history merging into myth, religious rites, caste customs, military lore, descriptions of city or country life. And four cantos are little anthologies of the poetry of the period (seashore and mountain songs, hunters' and milkmaids' songs), thereby giving us a vivid picture of early Indian life in all its aspects.