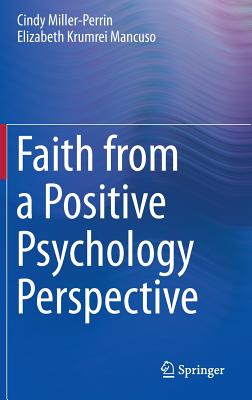 This book highlights religious faith from a positive psychology perspective, examining the relationship between religious faith and optimal psychological functioning. It takes a perspective of religious diversity that incorporates international and cross-cultural work. The empirical literature on the role of faith and cognition, faith and emotion, and faith and behaviour is addressed including how these topics relate to individuals' mental health, well-being, strength, and resilience. Information on how these faith concepts are relevant to the broader context of relational functioning in families, friendships, and communities is also incorporated.

Psychologists have traditionally focused on the treatment of mental illness from a perspective of repairing damaged habits, damaged drives, damaged childhoods, and damaged brains. In recent years, however, many psychological researchers and practitioners have attempted to re-focus the field away from the study of human weakness and damage toward the promotion of a positive psychology of well-being among individuals, families, and communities. One domain within the field of positive psychology is the study of religious faith as a human strength that has the potential to enhance individuals' optimal existence and well-being.

Cindy Miller Perrin earned her Ph.D. in Clinical Psychology from Washington State University in 1991 and is Distinguished Professor of Psychology at Pepperdine University. She joined the faculty at Seaver College in 1992 and enjoys teaching Child Clinical Psychology, Positive Psychology, Advanced Research Seminar (Psychology Honors Program), and Introductory Psychology. She also enjoys researching with undergraduates and is the recipient of the 2008 Howard A. White Award for Teaching Excellence. She is a licensed clinical psychologist who has worked with maltreated, developmentally delayed, and other troubled children and their families. Dr. Miller-Perrin has authored numerous journal articles and book chapters covering a range of topics, including child maltreatment, family violence, vocation and life purpose, and faith development in college students. She has co-authored three books, including Family Violence Across the Lifespan (with O. Barnett & R. Perrin, Sage 1997, 2005, 2011), Child Maltreatment (with R. Perrin, Sage 1999, 2007, 2013), and Child Sexual Abuse: Sharing the Responsibility (with S. Wurtele, University of Nebraska Press, 1992). She recently was awarded APA Fellow status in the American Psychological Association (APA) and has served as the President of the Section on Child Maltreatment and is currently President-Elect for Division 37 Society for Child and Family Policy and Practice of APA. Elizabeth J. Krumrei Mancuso earned an M.A. in Religion and Counseling from Pepperdine University in 2004 and a Ph.D. in Clinical Psychology from Bowling Green State University in 2009. She joined the faculty at Pepperdine University's Seaver College in 2009, where she is now Associate Professor of Psychology and teaches courses in psychotherapy, family therapy, basic and advanced research methodology, and psychology of religion. She has published journal articles on topics such as religious coping, spiritual struggles, gratitude, forgiveness, divorce, and college student mental health. She has also authored book chapters on spirituality in psychotherapy, religious coping, and spiritual struggles. Dr. Krumrei Mancuso has received grants and fellowships for research on the topics of religious coping, spiritual struggles, spiritual movement meditation, community-based research, prostitution, and intellectual humility. She has also received grants for supervising undergraduate research and for teaching courses in the areas of Judaism and service learning. She has enjoyed mentoring students and conducting clinical work. She has provided psychotherapy at a children's resource center, a community mental health center, and college counseling centers.