The Big Reset: War on Gold and the Financial Endgame (Paperback) 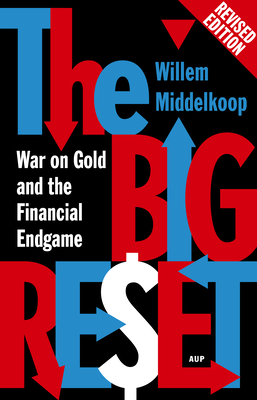 The Big Reset: War on Gold and the Financial Endgame (Paperback)

Amid the turmoil in the Eurozone, economic problems in Russia, stagnation in Japan, and rumblings that China may slip into recession, the one reliable asset is the American dollar. While it may encounter ups and downs, investors for decades have been confident that it will never lose a substantial part of its value.

That may be about to change. In The Big Reset, Willem Middelkoop lays out the case for an inevitable monetary reset, one that will be designed to keep the United States in the driver's seat, but will include strong roles for the Euro and China’s Renminbi—and, crucially, gold. This fully revised edition of Middelkoop’s book takes into account developments since its original publication, which have only strengthened the case for the coming return of gold.

Willem Middelkoop is a Dutch investor, entrepreneur, and publicist and the founder of the Commodity Discovery Fund. He is also a member of the advisory board of the London-based Official Monetary and Financial Institutions Forum and a founding shareholder of Startupbootcamp Amsterdam, a business accelerator program. He is the author of several books on the economy and history of financial markets, which have been published in nine languages, including Arabic and Chinese.

“A readable, persuasive book. . . . Recommended.”
— Choice, on the first edition

“This is a wonderful history and description of gold and it would be in everyone’s interest to understand its conclusion.”

“An outstanding book about the coming transfer of the economic world power due to the decline of the world supremacy of the United States. Written from an economic point of view it leads to the same result as in the famous book of Samuel Huntington, The Clash of Civilizations. Willem Middelkoop’s best book so far.”

“Willem Middelkoop and The Big Reset is right in the thick of the action! Great book; awesome statistical reference to go along with the analysis.”

— James Rickards, author of The Death of Money and Currency War, on the first edition