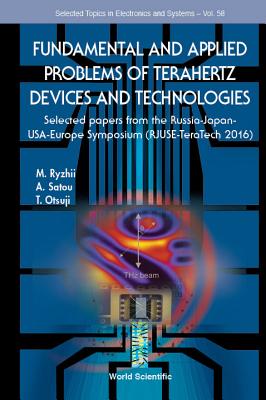 This is book number 58 in the Selected Topics in Electronics and Systems series.

Terahertz (THz) electromagnetic waves, phenomena in the THz range and related technological issues have been explosively investigated during the recent two decades. However, its potential as a disruptive technology to commercial applications has yet to make any impression.The Russia-Japan-USA-Europe Symposium on Fundamental and Applied Problems of Terahertz Devices and Technologies (RJUSE-TeraTech 2016), held at Katahira Campus of Tohoku University, Sendai, Japan on October 31 - November 4, 2016, aims to bring together researchers from Russia, Japan, USA and Europe, who are working on the broad range of related problems in the terahertz devices, technologies and applications, to discuss on state-of-the-art results and future directions and collaborations in the development of THz.This is the fifth in the series of preceding successful symposiums in Terahertz Devices and Technologies. It contains 14 selected extended papers presented at the RJUSE-TeraTech 2016 symposium, addressing the variety of topics, in particular, THz detectors based on double heterojunction bipolar transistors (DHBT) and field effect transistors (FET) utilizing resonant plasma effects, quantum cascade (QCL) and HgCdTe quantum-well heterostructures, and graphene-based THz devices.