Car Crazy: The Battle for Supremacy Between Ford and Olds and the Dawn of the Automobile Age (MP3 CD) 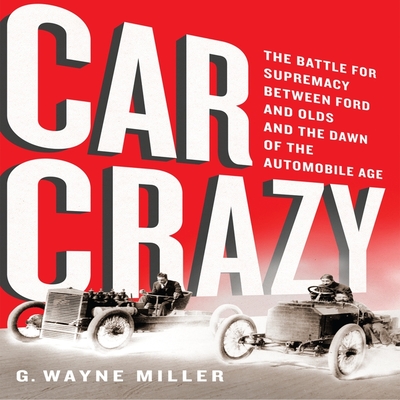 Car Crazy: The Battle for Supremacy Between Ford and Olds and the Dawn of the Automobile Age (MP3 CD)


This title is likely unavailable. Email or call for price and availability.
In Car Crazy, G. Wayne Miller, author of Toy Wars: The Epic Struggle Between G.I. Joe, Barbie, and the Companies That Make Them and Men and Speed: A Wild Ride through NASCAR's Breakout Season, takes listeners back to the wild and wooly years of the early automobile era-from 1893, when the first U.S.-built auto was introduced, through 1908, when General Motors was founded and Ford's Model T went on the market. The motorcar was new, paved roads few, and devotees of this exciting and unregulated technology battled with citizens who thought the car a dangerous scourge of the wealthy which was shattering a more peaceful way of life. As the machine transformed American culture for better and worse, early corporate battles for survival and market share transform the economic landscape. Among the pioneering competitors are: Ransom E. Olds, founder of Olds Motor Works, inventor of the assembly line (Henry Ford copied him), and creator of a new company called REO; Frederic L Smith, cutthroat businessman who became CEO of Olds Motor Works after Olds was ousted in a corporate power play; William C. Billy Durant of Buick Motor Company (who would soon create General Motors), and genius inventor Henry Ford. The fiercest fight pits Henry Ford against Frederic Smith of Olds. Olds was the early winner in the race for dominance, but now the Olds empire is in trouble, its once-industry leading market share shrinking, its cash dwindling. Ford is just revving up. But this is Ford's third attempt at a successful auto company-and if this one fails, quite possibly his last. So Smith fights Ford with the weapons he knows best: lawyers, blackmail, intimidation, and a vicious advertising smear campaign that ultimately backfires. Increasingly desperate, in need of dazzling PR that will help lure customers to his showrooms, Smith stages the most outrageous stunt of the era: the first car race across the continental United States, with two of his Olds cars. The race pits the dashing writer Percy Megargel, a wealthy New Yorker, against Everyman mechanic Dwight B. Huss, a sturdy Midwesterner-men who share a passion for adventure and the new machine. Covered breathlessly by the press and witnessed by thousands in the communities they pass through, Megargel and Huss encounter marvel, mishap, conflict, and danger on their wild 3,500-mile race from Manhattan to Portland, Oregon, most of it through regions lacking paved roads-or any roads at all...Meanwhile, the Ford/Smith battle develops in the newspapers and courtroom dramas. Its outcome will shape the American car industry for a century to come. Car Crazy is an exciting story of popular culture, business, and sport at the dawn of the twentieth century, filled with compelling, larger-than-life characters, each an American original.