Immigrant Secrets: The Search for My Grandparents (Paperback) 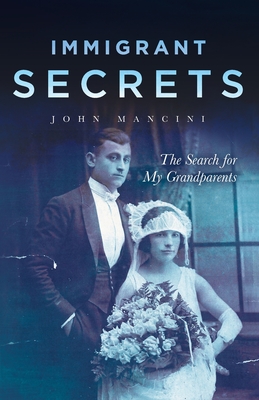 Immigrant Secrets: The Search for My Grandparents (Paperback)

The only thing my father ever said about his Italian immigrant family was that his parents died in the 1930s, shortly after arriving at Ellis Island. Except they didn't. Once I began the search for my grandparents, I mostly ran into dead-ends. Until the 1940 Census. My grandparents magically appear, but as inmates at the Rockland Insane Asylum. What happened? Why all the secrecy? And how did I use genealogy to unravel the mystery?

Like many of their greatest generation compadres, my parents, Joseph and Sallyann, quickly headed from New York City to the suburbs in the 1950s shortly after they were married. They arrived in New Jersey, and began their own personal population explosion, having six kids-John, June, Joseph, Jennifer, Jeffrey, and Jeanne-within an eleven-year span. Yes, all Js. It was a typical story of life in the suburbs. Imagine the television show The Wonder Years set in New Jersey, and you can get the picture.

On The Wonder Years, you always had a feeling there was some untold story concerning Kevin's father Jack and his father. Bit by bit over the years, the backstory is revealed. Kevin's father was born in 1927. He grew up during the Great Depression, served in the US Marine Corps during the Korean War, and worked as a product distribution manager at NORCOM, a somewhat mysterious large military defense company. Later, he started his own business building and selling handcrafted furniture. In the last episode, it was revealed that he died of a heart attack in 1975.

There are certain parallels. My father was born in 1925. He grew up during the Great Depression, served in the US Navy during WWII and worked as a business analyst at Union Carbide, a somewhat mysterious large chemical company. Later, he started his own business with a friend, but I have no idea what they did. In my father's last episode, he had a heart attack in New York City in 1987 shortly after officially retiring.

There is one significant difference between Jack Arnold in the Wonder Years and my father.

My father had no "backstory." My father never mentioned his family. Never. We only knew - or thought we knew - that his parents died in the 1930s. Unless you knew my father -- the consummate family man -- you will have no idea how weird this was.

And therein are the seeds of my quest to unravel our family history mystery.

In a pair of ship manifests, I discovered my father's parents, a pair of Italian immigrants arriving at Ellis Island in the early 1920s, intent on grabbing their share of the American dream. In the 1930 Census, I found a family of four - my grandparents, my father and his brother -- with a tenuous foothold on that dream, operating a small fruit stand in Manhattan.

After that, I had mostly frustrating dead-ends -- until the release of the 1940 Census. My grandparents magically reappeared in the Census - but as "inmates" at the Rockland Insane Asylum, never to reemerge. And through my entire lifetime until my father's death, there was no mention that he had an extended family of aunts and uncles and cousins, all living within driving distance.

What happened? Who were these people? How did their lives go so awry? And why all the secrecy?