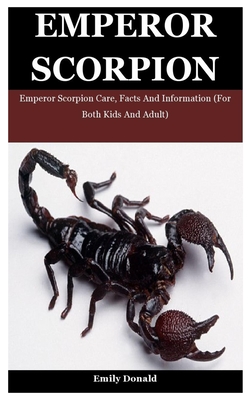 
Backordered - ETA Unknown
This book cannot be returned, cancelled, or exchanged. Please call for availability and pricing
Scorpions are getting progressively famous as pets, particularly sovereign scorpions. On the off chance that you are into 8-legged creature and creepy crawlies, you will discover a great deal to like about the sovereign scorpion. They are not incredible for taking care of, however they hush up, clean, and simple to think about. What's more, to the extent scorpions go, they are submissive. They require a sensibly long haul responsibility and finding a willing pet sitter may represent an issue. This scorpion is the one frequently suggested for first-time scorpion proprietors (in spite of the fact that it isn't prudent as a pet for small kids). Sovereign scorpions are not especially risky contrasted with other scorpion species. It will once in a while sting or squeeze except if it's inclination undermined. Their sting resembles a honey bee sting. It is difficult, however clinical consideration isn't typically fundamental. A few people may get an anaphylactic or extreme unfavorably susceptible response to the venom as they do with honey bee stings which would require clinical consideration.