Abraham Lincoln: His Early Years & Early Manhood, With A Brief Account OF His Later Life (Paperback) 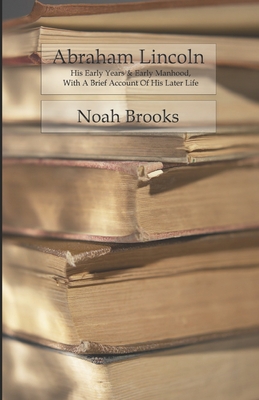 Abraham Lincoln: His Early Years & Early Manhood, With A Brief Account OF His Later Life (Paperback)


Available in Warehouse. Wait for Email Confirmation for ETA
This book cannot be returned, cancelled, or exchanged. Please call for availability and pricing
"Mr. Brooks's story of the life of Abraham Lincoln is a distinct addition to our knowledge of the man and of the scenes through which he passed in becoming an uplifter of the human race. Mr. Brooks knew Lincoln well in Illinois, as well as later in Washington. He was himself a pioneer during some of the most stirring times on the border, and, in consequence, he has written in unusual sympathy with the difficulties and triumphs of border life. In the crude surroundings that then were the lot of all, the story of Lincoln's youth and early manhood possesses a peculiar interest. In such a tale we catch gleams of a true nature tucked away in the lank form and homespun, and we watch a character grow clear - outlined through the power of a strong moral nature. The wilderness afforded splendid tests of manly qualities, and kept the weak at bay. The axe, the maul, and the grubbing-hoe answered only to the quick eye and the sinewy frame. Abraham Lincoln, strong-hearted and true, swung, split, and dug in "the land of full-grown men"; and he emerged thence a leader among men. His experiences were singularly varied and dramatic; yet, in the main, they were typical of unnamed thousands of our fellows who wrote on the broad West the strongest characteristics of our race." - Frank Lincoln Olmstead.