The Emerald Tablets of Thoth the Atlantean (Paperback) 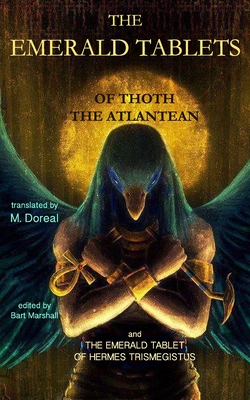 The Emerald Tablets of Thoth the Atlantean (Paperback)


Available in Warehouse. Wait for Email Confirmation for ETA
This book cannot be returned, cancelled, or exchanged. Please call for availability and pricing
Most ancient spiritual texts are of unknown or uncertain origin, but few are as deeply shrouded in myth, legend and mystery as The Emerald Tablets of Thoth the Atlantean, and the closely associated, and more well-known Emerald Tablet, attributed to Hermes Trismegistus. In this book, Bart Marshall, a renowned translator of many eastern and Christian texts, presents these valuable teachings in a poetic, intensely readable form.Scholars speak of the Emerald Tablet as one of the most mysterious documents ever put before the eyes of man, and describe it as everything from a succinct summary of Neoplatonic philosophy, to an extraterrestrial artifact, to a gift from Atlantis. The Tablet is attributed to the legendary figure of Hermes Trismegistus, said to be an ancient philosopher, healer and sage. References to Trismegistus can be found in Renaissance, Christian, Islamic, Roman and Greek literature, and the Tablet appears and disappears across the ancient world before and after the birth of Christ. Spiritually, the Emerald Tablet and the Emerald Tablets of Thoth are closely related to alchemy, and are said to reveal the secrets of creating the Philosophers Stone. Alchemical traditions, whether European, Middle Eastern, or Asian, pursue the same prize-the creation of the Philosopher's Stone. Also known as the Pearl of Great Price, the Wish-Fulfilling Jewel, and the Heart of the Sun, it is the tool that turns base lead into gold. The ultimate insight to be discovered by the wise, is that the alchemical process is an allegory of spiritual development, outlining inescapable psychological steps one must pass through to reach Self-Realization. It is the ultimate transmutation, turning the base lead of ego into the gold of enlightenment through a process of destruction and refinement. To the master alchemist, producing physical gold is not the objective. Transmuting and refining the soul is the true prize.