The Myth of White Fragility: A Field Guide to Identifying and Overcoming the Race Grifters (Paperback) 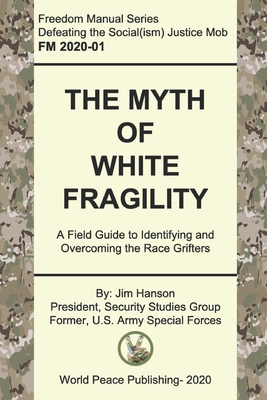 The Myth of White Fragility: A Field Guide to Identifying and Overcoming the Race Grifters (Paperback)


Available in Warehouse. Wait for Email Confirmation for ETA
This book cannot be returned, cancelled, or exchanged. Please call for availability and pricing
"The Myth of White Fragility" is the first book in a new series, Freedom Manuals - Defeating the Social(ist) Justice Mob.by President of Security Studies Group and Special Forces veteran Jim Hanson.It's a departure from his previous work which largely focused on national security and included the book "Cut Down the Black Flag - A Plan to Defeat ISIS. But as Jim noted "The greatest danger America faces right now are the socialist forces of wokeness and their social justice shock troops" The first Freedom Manual takes aim at the book "White Fragility" by Robin DiAngelo which is #1 on the NY Times non-fiction paperback list after 97 weeks overall there. It is now the preferred weapon of the social justice movement for anti-racism training and that trend is bad for everyone, White Fragility is a collection of the worst ideas from academia and the activist Left all cobbled together into an incoherent attempt to brand all White people as racists, all American institutions and processes infected by Systemic Racism and the country as a whole as a White Supremacist nation.The Myth of White Fragility completely exposes the woman behind the curtain nature of this pernicious attempt to use these supposedly racist systems to socially engineer the White people who benefit unfairly from them. The claims in White Fragility take examples of disparate outcome for blacks e.g. higher rates of incarceration or lower representation in certain professions and move immediately to Systemic Racism as the cause. No other potential causes for this are examined or even allowed. Hanson states "Any first-year statistics student knows that violates the rule that correlation is not causation. But White Fragility is not about proper analysis, it uses racism as a method to gain control and impose equality of outcome, the basis of Socialism".Each chapter of the Freedom Manuals (FM) starts with a straight talk Bottom Line Up Front explaining the fatal flaws of White Fragility in layman's terms. Then moves to a detailed analysis to provide ammunition for arguments on the topics in The Deep Dive. Then ends with Calls to Action which give the reader substantive ways to get in the fray and help stop the Social(ist) Justice Mob from fundamentally transforming this country into a steaming hot mess of Wokeness.