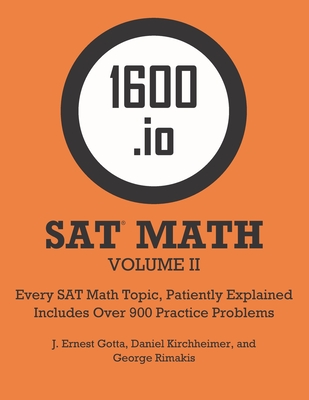 
Available in Warehouse. Wait for Email Confirmation for ETA
This book cannot be returned, cancelled, or exchanged. Please call for availability and pricing
NOTE: This is Volume II of a two-volume set; each volume must be purchased separately.] Setting the new standard: The SAT Math book that you've been waiting for. The game-changing 1600.io "Orange Book" establishes a new category of premium SAT instructional materials. This groundbreaking text is not a collection of "tricks" or "hacks" for getting around the SAT's function of assessing students' skills. Instead, it meets the test on its own terms by providing comprehensive, clear, and patient education in every mathematical concept that can appear on the exam according to the officially published specifications for the test. Unprecedentedly rich and comprehensive, this text has 850 pages, 22 chapters, over 900 practice problems broken down into 95 unique categories, more than 200 example problems with multiple written solutions, over 600 SkillDrill(TM) mini-problems, available video explanations to 1,350 SkillDrill and practice problems, and an innovative appendix that links all 1,508 SAT problems across 26 released practice tests to their corresponding topic explanations in the book.Each volume in the series contains chapters which have section problems, chapter problems, SkillDrills, answer keys, and lists of related real problems from released tests. Volume I (available separately) contains the following chapters: Volume II (this book) contains the following chapters:
Note that this is a two-volume set, with the topics divided between the volumes, so students should purchase both volumes to have the complete text.